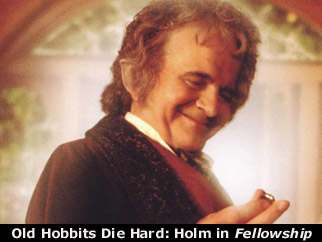 by Walter Chaw At the heart of Peter Jackson's brilliant The Lord of the Rings: The Fellowship of the Ring--the first of three cinematic adaptations of Tolkien's beloved fantasy, shot simultaneously for release in consecutive years--is a favourable melancholy, a despair born of two things: the crucial feeling of desperation that infests a small band of heroes striving against an invincible evil; and the knowledge that this film will soon end, its sequel twelve months away. Jackson has translated nearly every element of Tolkien's universe, from a vast, sprawling history implied in the language and the actions of its multi-specied characters, to a completely immersive fantasy realm with nary a seam to spoil the illusion, to a quest that's worthy of epic attention. He's captured the sadness and moral weight of Tolkien with the kind of deep reality that seems effortless but is born of a meticulous preparation and all-consuming vision. It takes a certain skill to make things look good; it takes genius to keep the pretty pictures from overwhelming the narrative of what is, in this case, a universally familiar story. Ridley Scott never quite got the hang of it.

In many other ways, Jackson's film surpasses Tolkien. Though adept at the creation of a rich history and a multi-layered reality, Tolkien lacked a gift for crafting climactic scenarios and compelling action sequences. You'll find no such problems in The Fellowship of the Ring, particularly when it comes to the fighting: Every sword thrust, axe chop, and slung arrow lands with a savage purpose. One forgets that many of the antagonists are computer-generated. Peter Jackson is among the few directors truly capable of integrating CGI and live-action (as evidenced by the underestimated The Frighteners), a knack attributable to his understanding that images should augment a scene and not upstage it. But even better than Jackson's visionary re-imagining of Tolkien's battles is his expulsion of the British philologian's subterranean religiosity and subtext of virulent racism. The Fellowship of the Ring manages to be neither proselytizing nor xenophobic while retaining some political elements that make it surprisingly poignant for a modern audience. It is, in other words, a personal story about hardship that refrains from such easy relationship crutches as schmaltz and, at the other end of the spectrum, a patronizing belligerence.

Frodo Baggins (Elijah Wood) is a hobbit, a creature approximately four feet in height (the actors were digitally, flawlessly shrunk) who lives in the ever-flowering Shire's bucolic Hobbiton. On the occasion of his uncle Bilbo's (Ian Holm) 111th birthday, Frodo is given a mysterious ring as his birthright. The wizard Gandalf the Grey (Ian McKellen) suspects something infernal of the ring when the otherwise honest Bilbo lies to hold onto it. A quick study reveals that it belongs to a dark lord now seeking, through a steady rebuilding of his armies, to regain the ring and with it his corporeal form. The malevolent warlord (named "Sauron") dispatches nine wraiths: hooded avatars riding midnight steeds whose voices sound like screaming children. Frodo is forced to leave his beloved Shire on a journey in which he enlists allies (the titular Fellowship) to destroy the ring in the fires of a volcano at the heart of the enemy's realm.

Tolkien's The Fellowship of the Ring, read variously as a Christian text, a fable of industrialization, and a parable of WWII with its mechanized grand fiend and a confederacy of free peoples allied against him (Tolkien denies the connection to the second World War), functions most effectively--and Jackson understands this--as the most important modern example of the archetypal hero's journey. Frodo is the classic reluctant champion, the son of unlikely parentage called upon to complete an impossible task against forbidding odds. Joining Frodo are Gandalf, his hobbit friends Sam (Sean Astin), Merry (Dominic Monaghan), and Pippin (Billy Boyd), a pair of humans in Boromir (Sean Bean) and the mysterious Strider (a fierce Viggo Mortensen), an Elvish archer, Legolas (Orlando Bloom), and a gruff dwarf named Gimli (an unrecognizable John Rhys-Davies).

Basically a long flight across several realms of Tolkien's Middle Earth, Jackson has crafted distinct looks for each demesne. The black-plumed conflagration of Sauron's infernal homeland Mordor, the soaring spires of the Elf-home Rivendell, the Giger-cum-Robert Mills tower Isengard (stronghold of the treacherous wizard Saruman (Christopher Lee))--all astonish. The highlight of the film is a trip through the dark Mines of Moria. A massive Dwarven city carved through a mountain (it is a four-day walk from one end of it to the other), Moria is the backdrop for three of the film's finest set pieces: a struggle with a terrifying thing in a pond; a battle against a horde of goblins and their pet cave-troll; and a confrontation with a demon of smoke and fire: the winged, whip-wielding Balrog.

At its best, there are moments in The Fellowship of the Ring that I have only seen in my most winsome and wildest fantasies. At its worst--and there are stumbles--the film becomes too enraptured with its own gravity and bogged down as a consequence. If you're a newcomer to the world of Middle Earth, rest assured that the flurry of implied back-stories are faithful to Tolkien's myth-making, the encyclopaedic knowledge of which is not vital to your enjoyment of the film--it's more a matter of knowing that the places and things in this world have names than knowing the names proper. In a slightly misguided effort to present a more unified story, however, Jackson has incorporated a grand skirmish only related in a supplementary work (The Silmarillion), as well as one too many scenes that express the importance of an event in vain. Suffering the most, the incandescent (literally, it so happens in this case) Cate Blanchett has her performance as the Elven queen, Galadriel, almost entirely obscured by sound effects, lighting, and visual pyrotechnics that seem only to underscore a point ('the ring is evil') that has been made a dozen times previous.

Even given its occasional miscue, The Fellowship of the Ring is an unqualified triumph, its status as the best Western fantasy film ever made all but indisputable. (The Japanese have been making fantasies on this level through the anime medium for years.) I have no doubt the series will get better now that the groundwork is laid. The cast carries off the tricky balance between high drama and nuance, the characters are driven by recognizable motivations of greed, love, loyalty, and courage, and Jackson's direction is very plainly above reproach. The breadth of imagination on display here is awe-inspiring, and the reserve with which the fantasy scenario is handled no less so. As an adaptation, it cuts the fat yet preserves the soul of the work, reminding of Kenneth Branagh's mud and glory Henry V in its visceral force and illumination of the source material. (Jackson's film explained things to me from the original text that don't make sense and repairs things that don't work.)

New Line Cinema's unprecedented investment of time and money has been justified, and the film plays too short at a full three hours. The wait already seems interminable for not only the release of the second film (The Two Towers) but also the next showing of this one that I can attend. The uncompromising The Fellowship of the Ring reminds most of us why we go to the movies in the first place: to be frightened, to be excited, to be transported, to be treated with respect. To be enchanted. I can't wait to be reminded again. Originally published: December 6, 2001.