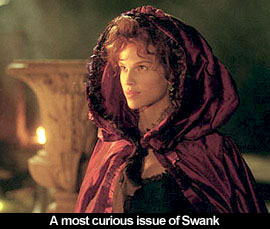 by Walter Chaw Alternately boring and hilarious, The Affair of the Necklace is high cheese of the French Revolution variety, delighted by its own creamery version of ribaldry (there are more stifled titters in Affair than at an Oscar Wilde convention) and infatuated with the passion that ripping bodices has failed to imply for over two centuries. It is inadvertently self-critical (at various points in the film characters breathily intone, "It is amazing how quickly you have become tedious," or "It is a monument to vanity," or "The public found her guilty of excess"), and credit is due, I suppose, to poor, gaffed Hilary Swank for being either too daffy to see that irony or a better actress than she appears in concealing any self-aware mirth. The Swank of The Affair of the Necklace is the Swank of Buffy the Vampire Slayer, which is of course the only Swank, her stunt turn in Boys Don't Cry notwithstanding. The most astonishing thing about The Affair of the Necklace, though, is how with a cast that includes Brian Cox, Christopher Walken, and Jonathan Pryce, it manages to be jaw-droppingly awful; had I not squirmed in mute horror, transfixed before the film's appalling majesty, I would not have believed it myself.

The plot concerns a diamond necklace (something I deduced mostly from the film's title) and its role in the machinations of a title-hungry waif named Jean (Swank) as well as, eventually, the downfall of the French monarchy. (The trinket becomes the catalyst for the French Revolution itself.) It abuses every narrative crutch in the canon: the extensive voice-over; slow-motion flashbacks shot on different stock; reflective epilogue; opening title cards and end cards; and a simply stunning amount of expository dialogue that recaps the "action" at ten-minute intervals. For all that, the story is difficult to follow, owing, no doubt, to the dual gorgons of "say what?" and "zzzzzzzzz." The Affair of the Necklace would actually serve as a nice primer for first-year film students curious to learn what to avoid in their own films (French period settings, Hilary Swank, etc). If you take this and The Musketeer (the other 2001 Hollywood-goes-Gallic period-piece disaster, that one serving as a cautionary tale against Mena Suvari) in an eye-clawing double-feature, I suspect that somewhere around the beginning of the second reel of The Affair of the Necklace you'll be transported on a Native American vision quest with Coyote. "It's cheaper than peyote" is not, by the way, a recommendation to attempt such a thing--at least until critics are eligible for malpractice insurance.

In the new age-scored flashback, we see Jean's father murdered by French soldiers for "speaking out against the monarchy," the last angry man, we presume. Years pass and Swank is chortled over by a fey gigolo (Simon Baker): "Her fashion is the cutting edge--two years ago," he laughs, "but her eyes are...intriguing!" (I quietly interjected, "And doll-like.") The two form an unlikely alliance in duping a lascivious cardinal (Pryce) into believing that the ever-imperious, ever-cackling Marie Antoinette (Joely Richardson) is in love with him and wishes that he purchase a ridiculously expensive necklace for her. We know that the jig will eventually be up, as The Affair of the Necklace opens in 1786--at Jean's trial; we also know that the film is going to suck because movies that end with trials do. Enter Christopher Walken as a German soothsayer (Brian Cox's "where's my paycheck" voiceover greasily informs that great rulers always consulted spirit mediums, positing The Affair of the Necklace as a subversively pro-Reagan piece two decades too late), doing as much of an accent as Christopher Walken ever does, and Brian Cox, playing the head of the royal guard, a man who scowls a lot and gets to be the narrator. In their defense, Cox, Walken, and Pryce provide the only moments of the film that are bearable. Walken especially, having been in so many bad movies on purpose, seems to know that the only way to escape this shipwreck is on a raft of camp overkill.

The Affair of the Necklace is a monument to bad judgment and bad taste. It is amazing to me first that Hilary Swank is still getting away with not auditioning for roles, and second that she is getting roles in period pieces that don't require her to act like a Nebraskan boy. It's preposterous, leaden with mock-gravitas, and foundering in the shallow end of historical revisionism (that there's a "dialect" coach listed in the credits of this film is a deliciously complex riddle--did the 18th-century French really speak Valley?). Rolled out in limited release in the hopes of making some lists--the last and cruellest irony of The Affair of the Necklace is that it will succeed. Originally published: December 26, 2001.