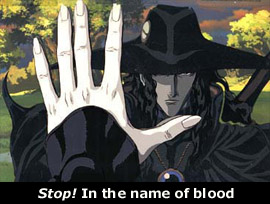 by Walter Chaw Yoshiaki Kawajiri's name is probably not as familiar to anime's United States fanbase as Hayao Miyazaki, Katsuhiro Ôtomo, Mamoru Oshii, Isao Takahata, or Shinichirô Watanabe, but amid those in the "know," his Ninja Scroll is among the best pure action/fantasy films of the last fifty years in any medium. Tightly plotted and drawn in a style that crosses Bernie Wrightson with Kelley Jones's work in Neal Gaiman's Sandman comic series, Ninja Scroll is one of few eloquent stand-alone justifications for Japanese animation as a movement of true cinematic value and lasting merit. Perhaps accounting for his relatively anonymous standing, Kawajiri's other films veer wildly from the sloppily drawn though viscerally intriguing Wicked City to the frankly awful Demon City Shinjuku. With Vampire Hunter D: Bloodlust, Kawajiri's first film since Ninja Scroll six years back, the director takes on Hideyuki Kikuchi's popular manga D--yousatsukou (the sequel to Kyuuketsuki Hantaa 'D', made into 1985's Vampire Hunter D by Toyoo Ashida), and produces something that falls in quality somewhere between the dizzying heights of Ninja Scroll and the occasionally weak Wicked City, while borrowing images and elements from both.

D (short for "dunpeal," a creature born from a sexual union of human and vampire) exists in the distant future in a blasted wasteland most resembling that found in Watanabe's brilliant Cowboy Bebop series. After a visually dazzling prologue, a scrawl informs that although vampires have been a problem in the future, the rise of bounty hunters has rendered them all but extinct. When Charlotte (voiced in English by Wendee Lee) is abducted by one of the last vampires, Meier Link (John Rafter Lee), D is hired to rescue her if possible and murder her if necessary. A second group of bounty hunters, led by crossbow-wielding Borgoff (Matt McKenzie) and damaged goods Leila (Pamela Segall), are in pursuit of the same goals. As the three converge in their pursuit, in the looming perspectives and ominous lighting of Kawajiri's Bauhaus landscapes (resembling Laszlo Moholy-Nagy's photographs in particular)--with one sequence set before a horizon-painted vampiric "safe house" that stunningly evokes Wassily Kadinsky's series of 1913 "Compositions"--they discover that everything may not be as it appears in Meier and Charlotte's relationship.

It's a shame that in the post-Crouching Tiger, Hidden Dragon landscape, Vampire Hunter D: Bloodlust is receiving its American release entirely dubbed and often poorly. The offshoot of the decision not to retain the Japanese voice actors is that many of the stereotypes of dubbed Asian cinema (stilted dialogue, bizarre philosophizing, unintentional humour) may convince neophytes to dismiss the film as camp. The truth of it is that there is more invention in Vampire Hunter D: Bloodlust than in a dozen mainstream American sci-fi/fantasy epics of the last several years. Astonishing stop-offs in an ancient vampire familiar society of discard circus freaks, a flight along an impossibly massive suspension bridge, a witnessing of a school of huge sand mantis, and a finale in a towering cathedral ruled by the ghost of a mad Countess...pale next to a relatively quiet scene where a vampire risks immolation in the day's sun to rescue his lady love.

For all its pyrotechnics, Vampire Hunter D: Bloodlust succeeds (as does Ninja Scroll) on the strength of a blue thread of melancholy woven tightly in counterpoint to incomparable visual audacity. Mature and perverse though not sexually violent in the way that many have equated with the anime genre (and that Kawajiri himself was guilty of in Biohunter and Wicked City), Vampire Hunter D: Bloodlust is a sober action film as viscerally surprising as it is surprisingly affecting. Originally published: November 9, 2001.