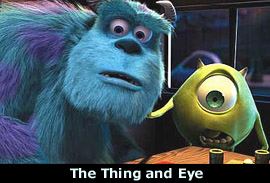 by Walter Chaw Ten feet tall and covered in blue and purple fur, James "Sully" Sullivan (voiced by John Goodman) is the leading scarer at Monsters, Inc. and best friend to his "handler/assistant," a green nebbish of a cyclops named Mike Wazowski (Billy Crystal). Despite their occupation, they're sweet fellas; less so is Randall Boggs (Steve Buscemi), a colour-changing, chameleonic thing who is jealous of Sully's reputation. When a dreaded child escapes into the monster's factory, Sully and Mike gradually unearth Randall's nefarious plot to overtake Sully for "Most Bloodcurdling" while trying to hide the renegade kid from their tick-like boss Henry J. Waternoose (James Coburn) and Celia (Jennifer Tilly), Mike's girlfriend.

The cleverness of Pixar Animation's new Monsters, Inc. begins with the homonym embedded in its title, touches base in a sushi restaurant affectionately called Harryhausen's (after the late, great stop-motion animator), and carries on through a brief shot of a television monster psychiatric expert appearing in the shape of a hot dog as Freud shifts disquietly. There is a point, however, when Monsters, Inc. becomes something a great deal more than just clever. All of the beastly denizens in Monstropolis are pathologically afraid of little boys and girls--a considerable problem, for children's screams supply energy to the monsters' city and vehicles. The titular corporation is a power plant comprised of doors that, once powered up, open into the bedrooms of children through closet portals. (I would have liked a few trap doors that led to the underneath of beds, but here I reveal a little too much about my own bogeys.) Should any of the creatures inadvertently bring back an artifact from their night job (say a sock, or a string of ducks), the offending doodad is immediately incinerated and the hapless monster shaved and sterilized by an environment suit-clad "hut-hutting" task force called the CDA (Child Detection Agency).

Bruno Bettelheim once wrote a National Book Award-winning thesis called The Uses of Enchantment in which he detailed the function of fairytales in the emotional and psychological development of children. Fantasies, he theorized, needed dark elements to aid in the acceptance and defense of many of the trials that await youngsters as they grow towards maturity. Monsters, Inc. is in many ways a fairytale for adults in that it has, unintentionally, tapped into a collective fear inspired by our ever-escalating biological war, painted a succinct portrait of our uneasy symbiotic/parasitic relationship with the oil-providing Middle East, and even bridged the night frights of our childhood to the worries of our day-to-day.

Consider: that the frenzy with which the monster CDA squad treats possible contaminants mirrors the fervour of our government's quarantining and sterilizing suspicious objects; that the necessity for the monsters to intimidate the guardians of their power source mirrors our own tense relationship with the Middle East; and that it has packaged this stunningly topical message in a film that is light, smart, and kind-hearted. Though the creators of the several years in the making Monsters, Inc. did not have foreknowledge of what was to transpire prior to the film's release, it speaks to the archetypal eloquence of the story that we can see ourselves reflected in the travails of animated monsters.

With a couple of marvellous action sequences and computer animation that is impossibly bright and detailed (every hair on Sully's body is distinct and lifelike), Monsters, Inc. is truly a delight for the eye and a satisfying endeavour for the mind. It is free of flatulence gags and cheap shots, deriving its humour from a wealth of observational canniness (including an explanation for the Abominable Snowman and Bigfoot) and the engaging voice work of Goodman, Crystal, Buscemi, and Tilly. The film is sentimental but not insipid, scary but not terrifying, and exciting without sacrificing coherence and plot. Monsters, Inc. is the perfect balm for our fractured time: It will help children to defang the monsters they fear might exist and parents to confront the monsters they know exist. It's the first post-September 11th theatrical release to actually benefit from the atrocity--make no mistake that Monsters, Inc. would be a fine work nonetheless, but only half the film in any other time. Originally published: November 2, 2001.