Harry Potter and the Sorcerer's Stone (2001) 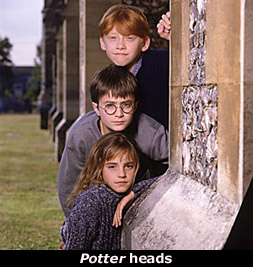 by Walter Chaw There is such a dedicated lack of controversy and tension in Harry Potter and the Sorcerer's Stone that all of its benefit as a children's fiction is lost to the machinery of Hollywood spectacle. Gone is the dread uncertainty, the persecution of a child because of parents or class, and any true appreciation of consequences in the various action scenarios that lockstep unfold to the strict dictates of the plot; it's Willy Wonka and the Chocolate Factory without the candy. At a bloated 152 minutes, the film depends to a peculiar degree on our familiarity with J.K. Rowling's outrageously popular series of books: it does little to establish the characters and has such a feeling of clockwork inevitability that it's shocking when the finale comes and goes with almost nothing resembling purpose, much less resolution. Though it's arguably faithful to the major movements of the book (thus satisfying a large population of its tyke fans until they begin to develop discretion), Harry Potter and the Sorcerer's Stone suffers from what I like to call the "Wizard of Oz" malady: no brain, no heart, no courage.

Harry Potter (Daniel Radcliffe) is a poor bespectacled lad living with his awful aunt, uncle, and cousin Dudley (Harry Melling). Interned beneath a stairwell and forced to perform servile tasks à la Cinderfella, on the eve of his eleventh birthday, Harry begins to receive strange invitations to attend something called "Hogwart's School for Witchcraft and Wizardry." Once there, Harry befriends twerpy Ron (Rupert Grint) and know-it-all Hermione (Emma Watson), fellow "first years" at a seven-year academy dedicated to training the wizards and witches of the future. Sadly, the reasons behind Ron's "twerpiness" (he's the youngest of several boys, and the least athletic and attractive) and Hermione's over-achievement (she's the child of two non-magical humans) are left glaringly unaddressed. The cleverly cast but equally underwritten staff of the Hogwart's school includes headmaster Dumbledore (Richard Harris), the snarling Professor Snape (Alan Rickman), and Hagrid, a kindly giant of a beast-keeper (Robbie Coltrane).

A pre-adolescent fantasy of an orphan discovering a secret lineage and magical powers, J.K. Rowling's crafty novel creates a distinct fantasy world with a well-defined set of guidelines while tackling many of the childhood fears (real, imagined, and metaphorical) of making new friends, confronting bullies, and discovering his legacy through the prejudices of others. The best moments of the book, the ones that lend it lasting value as a modern classic of youth literature, come in Rowling's attention to the darkness and fears that inform the rites of passage from infancy to adolescence. Chris Columbus, never known for his skill or intelligence as a filmmaker, has taken Rowling's book and presented an extended overview of its major moments, and in so doing left the resonance of the work in its noisome wake. Most disturbingly, he seems even to have caved into ultra-conservative religious morons by toning down the magic (there are no details of the actual lessons taught at Hogwart's, and the spell-casting is reduced to a few minor flourishes and a strange comic-relief kid who's always blowing things up) and side-stepping the sticky revelation that Harry actually talks to snakes in the reptiles' hissing language and not the Queen's English. Chris Columbus has never been known as a particularly gutsy director, either--in fact, the only reason he was picked to direct this film was, I suspect, because he's "safe." That says a lot about our culture and the degree to which we underestimate our children.

Harry Potter and the Sorcerer's Stone boasts of keen production design and exceptional costuming, but it relies on computer-generated images (CGI) for its special effects, the result of which is that everything from the Quidditch match (a game played on broomsticks, the rules of which are difficult to grasp in the film), to a troll attack, to a confrontation with a three-headed dog is carried off with an inserted unreality that's distracting. Although the final appearance of a parasitic villain suitably unsettles, the effect is notable only for the fact of itself, so unexpected and incoherent is the reason for his appearance. The most interesting thing about Harry Potter and the Sorcerer's Stone is that its inevitable success could be attributed to the fact that roughly 90% of the film's audience will have read the book upon which it's based. It's the ultimate example of a synergic multi-media construct: a near-universal familiarity with the source material lends the film the depth, conflict, and resonance it fails to otherwise provide. The flaw of this theory, though, is that the reverse is unlikely to be true: I doubt that very many people introduced to Rowling's fantasy realm through Columbus's film walk away from it inspired to seek out the Harry Potter novels. Originally published: November 16, 2001.