"I hate symbolic art in which the presentation loses all spontaneous movement in order to become a machine, an allegory - a vain and misconceived effort because the very fact of giving an allegorical sense to a presentation clearly shows that we have to do with a fable which by itself has no truth either fantastic or direct; it was made for the demonstration of some moral truth."
-Luigi Pirandello from Playwrights on Playwriting, ed. by Toby Cole, 1961 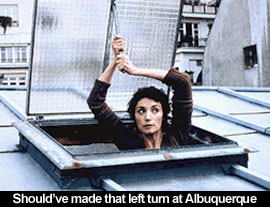 Nobel Prize-winning playwright Luigi Pirandello was forever interested in the relationship between moral truth and perceptions of truth, as well as the formalist connection between the stage and identity. His loose trilogy comprising Sei Personaggi in Cerca D'autore (1921), Ciascuno a Suo Modo (1924), and Questa Sera Si Recita a Soggeto (1930) predicted the theatre of the absurd, poised as it was on the precipice of the modernist threshold. These three are each plays within plays invested in existentialist concerns of self and reality and the relationship of the two. The first and most well-known ("Six Characters in Search of an Author") shows characters from an unfinished drama interrupting the rehearsal of one in progress; in the second ("Each in His Own Way"), art and reality are reversed, while the actor is hijacked by his role during the last ("Tonight We Improvise").

Pirandello in this period also wrote a series of plays specifically for actress Marta Abba, with whom he had a passionate affair. One in particular, Come Tu Mi Vuoi (1930), explores a search for personal identity following the trauma of war. Already made into a film by George Fitzmaurice in 1932 (starring Greta Garbo and Erich von Stroheim), "As You Desire Me" has as its protagonist a woman who remembers nothing of her past and remains malleable in the assignation of a new personality. Identity springing from the forced perception of others is familiar in Western cinema, from David Lynch's Mulholland Drive and most notably Hitchcock's Vertigo (which similarly uses an oil painting as a central point of identification), while the play Como Tu Mi Vuoi, honouring Pirandello's own instinct to locate a parallel metaphoric drama within the framework of a larger drama, is used as the binding chorus in Jacques Rivette's marvellous new film Va savoir ("Who Knows").

The first of the CAHIERS DU CINEMA critics to lay down his pen and take up the director's mantle in the period just preceding France's Nouvelle Vague ("New Wave"), Rivette, now 73, is invested in the theatre and life's reflexive relationship, and how time affects identity and the elasticity between ways of seeing and comprehension. Known for his infatuation with narrative (to the extent that his films average three hours in length and have lasted all the way up to thirteen), Rivette's films are luxurious and observant exercises in witnessing the play, the maker as the middle degree of Lacan's three degrees of awareness.

However, despite their fascination with theatre (recalling that Pericles centred Paris Belongs to Us, not to mention Va savoir's own resemblance to the roundelay farce of A Midsummer Night's Dream), Rivette's films are not formalist endeavours. An examination of Va savoir as merely a loose, subtly detached play on existentialism egregiously overlooks the stronger subtext of philosophical means towards impression and understanding, a subtext to which repeated references to deconstructuralist Martin Heidegger (and, by implication, his seminal discourse on modes of understanding, Poetry, Language, Thought) point. Va savoir simplifies the text by distilling the tripartite structure to its essential abstractions: poetry into seeing, language into communicating, and thought into being.

Camille (Jeanne Balibar) and Ugo (Sergio Castellitto) are married actors, briefly in Paris with their production of Pirandello's Como Tu Mi Vuoi. Ugo spends his off time looking for a lost manuscript from Italian playwright Carlo Goldini (an 18th-century author who revolutionized the commedia dell'arte through altering traditional character types) as Camille visits an old flame, a philosophy professor named Pierre (Jacques Bonaffe) currently living with new-age dance instructor Sonia (Marianne Basler). As Camille and Pierre toy with restarting their relationship, Ugo encounters the striking and nigh irresistible Do (Helene de Fougerolles) in a library, and soon after her no-account brother, Arthur (Bruno Todeschini). These six characters (recalling Pirandello's sextet looking for meaning through authorship) engage in a dazzlingly complex dance of interpersonal comedy that, like Jean Renoir's The Golden Coach, begins with the stage, and finds its completion through that same perspective (that destiny and fate spring from the structured hand of an absurdist god). All the while, the dialogue (written by Rivette, Pascal Bonitzer, and Christine Laurent) is obsessed with the ways that seeing, being, and communicating shape our discernment of personal identity despite, Rivette suggests, the ultimate futility of ever understanding another, much less the self.

Va savoir is a Guy de Mauppasant morality fable. The similarity is suggested in the introduction of an intrigue involving a lost ring and its paste facsimile, in the ways they serve as a metaphor for the significance that people attach to objects, and, conversely, the meaning that objects confer upon people. Listen to Camille: "I love him, what I do with him, being under his gaze." In one line, she describes a state of being ("I love him"), a state of communicating ("What I do with him"), and an act of seeing ("Being under his gaze"), while simultaneously describing herself as an object "under his gaze" and therefore having her love and reality defined by that objectification. The process, unlike a consonant process undertaken in Vertigo (a film slyly referenced by Ugo presaging a late high-wire duel for the honour of a woman ("You don't suffer from vertigo,do you?")), is not only fairly benign, but Rivette (and Pirandello) implies that it is the experience of all people of all times, always.

Va savoir is Rivette's most appealing and instantly accessible film (though I still prefer both Celine and Julie Go Boating and La belle noiseuse), the reason for which is multi-fold--a relatively short (for Rivette) running time of 150 minutes certainly helps. Although it may initially appear to be slow moving and centerless, Va savoir is a puzzle-box that requires a fairly simple key to unlock its pleasures. Listen for words that speak of knowledge, of how knowledge is acquired and how it is used to shore up emotional lacks and bridge Nietzschian abysses, and then of how that knowledge changes over time even as it delineates the ways in which an individual knows himself and believes that he knows others. The film is a work of extreme sensitivity, a gently absurdist wisdom, and a lighthearted grace. It is structured so playfully that it doesn't appear to be structured at all--until a finale that brings all the players to one lovingly crafted environment and a series of mellifluous epiphanies wherein the dread symmetry of all that has come before blooms into one of the most satisfying cinematic experiences of the year.