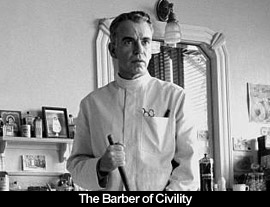 by Walter Chaw The noir genre was born of discomfort with women in the workplace, the rise of cynicism, and a world polarized by international conflict (WWII). Its symbol, the hardboiled detective, became the projection of the collective paranoia about the ascent of globalism and the death of Pollyannaism. Women and foreigners are not to be trusted in the noir universe; information is slippery and expensive; and the solution of the puzzle more often than not points back to a rot at the heart of the detective. It is the Oedipus/identity trajectory, complete with a blasted plague land, a murder, its thinly veiled culprit (noir is typically invested in process, not mystery), the appearance of a femme fatale, and a solution involving mortal self-knowledge. The noir hero may save the day, but at the price of being betrayed by those he loves. He is impotent to avenge his fallen friends and lovers, and at the mercy of a larger corruption that is unalterable and serves only to further degrade individual confidence. Tellingly, a great many noir works in literature and film begin with the death of a best friend or a partner and end with the realization that any victory is a hollow one in light of society's inexorable fall into chaos.

More than just a collection of thematic tropes, noir is also among the cinema's most distinctive visual forms, although its hallmarks have been cribbed to some degree from the austere lighting and canted camera angles of German Expressionism and other movements of the early eastern-European cinema. Despite the contribution of such American voices as Orson Welles, John Huston, Jules Dassin, and Howard Hawks, the art of noir was established by silent legends F.W. Murnau and Robert Wiene (Germany), G.W. Pabst (Austria), and others. It is difficult to underestimate or quantify the extent to which the pre-WWII tumult occurring in these often-exiled filmmakers' homelands affected the "hard-boiled" look and notions of noir, and on the other side, how much the organized hooliganism arising in the United States and the gritty literature of Raymond Chandler, James M. Cain, and Dashiell Hammett in the '20s and '30s influenced the end result.

Generally, the noir genre/movement/style is indicated by slatted light through blinds projected onto people engaged in falsehood and cunning, flashbacks and voice-over narrations, and bare-bulb chiaroscuro that is every bit as harsh and uncompromising as the paranoid realities of the noir world. The nascence and heyday of noir stretches from around 1940 to 1959 (though many would argue that Murnau's 1927 Sunrise marked the true beginning of noir's major stings), with Orson Welles's infernal Touch of Evil perhaps the last great film of the classical period. The one certainty is that WWII served as a catalyst for the organic evolution of the genre's texture, and that noir remains to this day one of the most popular film styles for revision, emulation, and in the case of The Man Who Wasn't There, resurrection.

Many a Coen Brothers film pays tribute to noir: the sly Blood Simple, which could be described as neo-noir; the nihilist Barton Fink; that satire of Hawks's The Big Sleep, The Big Lebowski. Yet until The Man Who Wasn't There, the Coens had not attempted a "straight" noir piece, and they've made up for lost time: The Man Who Wasn't There touches on every major convention of the genre with a level of artistry and brilliance that, through the help of cinematographer Roger Deakins (who becomes an instant forerunner for the Best Cinematography Oscar with this film), is at once innovative, breathtaking, and utterly slavish.

Ed Crane (Billy Bob Thornton) has a question to answer; he's asked it twice during the course of the film by two different people: "What kind of a man are you?" In a laconic voiceover, Ed repeatedly confides that he believes himself to be merely a barber. "I cut the hair." The young daughter of a friend, Birdy (Scarlett Johansson), thinks Ed's "an enthusiast." Creighton Tolliver (Joe Polito), a traveling salesman/entrepreneur, thinks Ed's a dry cleaner. And Ed's wife Doris (Frances McDormand) hasn't the faintest idea and likes it that way (when Ed wonders if they should really be getting married after just three weeks together, Doris says, "Why? Does it get better?"). Despite his declaration, Ed strives for something better, first manifesting itself in his decision to blackmail his wife's boss, Big Dave Brewster (James Gandolfini), so that he can invest in Tolliver's dry cleaning pie-in-the-sky, then in his determination to absolve his wife from blame, and finally, in his championing of Birdy's questionable musical ability.

Change consistently comes with a price, however, and soon there's a grisly murder, a suicide, an illicit pregnancy, an alleged UFO abduction, and a troubling speech by slick lawyer Freddy Riedenschneider (Tony Shalhoub) that applies the scientific theory of uncertainty (i.e., the act of observing an object changes the nature of that object) to issues of juris prudence. Clearly we're meant to deduce that the more we think about what sort of a man Ed Crane is, the farther we get from an answer.

Their best film since Barton Fink, The Man Who Wasn't There is deadpan slapstick of a kind that has become unique to the Brothers Coen. It is mature and weighty, paying homage to the existentialist complexity of the theatre of the absurd with a surplus of subtle humour, an ensemble rife with magnificent performances, Deakins's black-and-white photography, a dry and startling script (all the more so for its dedication to familiar noir conventions), and a score by Carter Burwell that's right up there with his majestic work on Miller's Crossing. It tackles issues as thorny and varied as that of identity, of the line separating dream from reality, and of karmic justice and circularity. It reminds of Godard's Alphaville, another film that respected noir conventions--but unlike Alphaville, The Man Who Wasn't There accomplishes its intellectual and stylistic pursuits without alienating audiences seeking to be entertained. The film is as magical as the finest noir produced during the genre's golden age. Originally published: October 11, 2001.