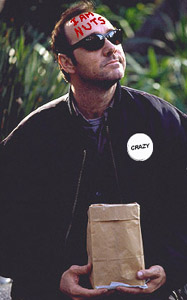 by Walter Chaw Madman Prot (Kevin Spacey) has been incarcerated for months at various state-run mental institutions. Because psychotropic drugs do not affect Prot, he's sent to Dr. Mark Powell (Jeff Bridges); presumably, Powell is the authority on madmen unaffected by psychotropic drugs. Prot, however, can also see ultra-violet light, map the orbits of undiscovered planets around undiscovered solar systems (begging a few questions), and talk to dogs by barking at them. Prot believes himself an alien from the distant planet K-Pax, and it's up to Dr. Powell to uncover the trauma that has unhinged this man. Along the way, Prot's unconventional (and wiseass) view of our foibles teaches us all a little about ourselves, leading to cuddly Patch Adams moments wherein this dangerous fruitbar repairs Dr. Powell's crumbling familial relationships and reverses insanity by urging his fellow inmates to look for bluebirds and attempt to kill one another. K-Pax is derivative, populist, feel-good trash of the first order--it's tailor-made for a populace gone daft from decades of insipid soup generally starring Robin Williams.

Our main question--whether Prot is an alien or just nuts--is never answered. There are so many manipulative inconsistencies embedded in the plot that the inquiry gets buried; once Prot has an ill-defined psychotic freak-out involving a sprinkler and a precious little girl, every single "proof" of his extraterrestrial status is left crumpled in the wake of the film's dedication to do-gooderism. The first hour of K-Pax hums along on exceptionally familiar alien-out-of-water foolishness, carried off with a degree of campy self-knowledge by the mildly embarrassed Spacey and Bridges. The last hour of K-Pax is an unbearable succession of simple-minded proselytizing about how "we earthlings" don't gather our rosebuds while we may that ends with the curing of every heretofore incurable lovable psycho in the loony bin and the saving of Dr. Powell's soul. In this way, K-Pax is like Don Juan DeMarco; in every other way, K-Pax is like water torture.

It's clear now that Spacey is a shameless ham who chooses flashy bits of embarrassingly activist nonsense (following up his everyman in American Beauty with Pay It Forward and this abomination) in the mistaken belief that we have endless patience for actors dedicated to ruining their reputations. K-Pax offers Spacey the coveted hypnotic regression gag and Spacey takes advantage of the proffered proscenium by affecting an Elmer Fudd speech impediment when playing Prot as a child, and by ululating and rending his clothing when playing Prot during the alleged climax. It's considerably less apparent why Jeff Bridges would want to be in K-Pax, seeing as how he's mainly the straight man to Spacey's unintentionally hilarious histrionics--and that he's been in this movie at least twice already.

Yet, the question of why Bridges would choose to remake his films Starman and The Fisher King is not nearly so thorny a question as why Kevin Spacey, after already banking two Oscars for tetchy performances in narratively-rewarding films, would go for a third by playing a magical gimp in a stinking heap of Hollywood garbage. K-Pax is the kind of frugal cinematic repast that doesn't miss a single dim-witted opportunity to preach being excellent to one another, the evils of eating meat (!), and the precariousness of the human race. As Prot says at one point: "Your planet is a class BA-31 planet: its future is uncertain." Uh-huh. I seem to remember similar sentiments being expressed in countless eco-horror sci-fi knock-offs that filled the underbill of Saturday matinees in the mid-Fifties.

Sadly, K-Pax lacks a rubber-tentacled monster or giant ants to make its distended running time remotely bearable--the only spectacle is the violent loss of self-respect endured by everyone associated with this sermonizing cataclysm, save director Iain Softley. After Hackers and Wings of the Dove, he didn't have any left to lose. The defining moment of the film comes when Prot engages the Powell family dog in conversation. It handily explains the inevitable (though surely modest) success of K-Pax: idiots speaking to simpletons in their native tongue. Originally published: October 26, 2001.