by Walter Chaw So the dialogue's not so bad (having seen Pearl Harbor), the story's not so obscure (having seen Akira), and the voice acting's pretty decent (having listened to Claire Danes do San in Princess Mononoke). It almost goes without saying that the film is hands-down the best ever based on a videogame, and that Squaresoft's 3-D captured animation is breathtaking and exciting, not just for the fact of itself but for what it portends of big-budget Stateside anime. What Final Fantasy: The Spirits Within reminded me of the most is Katsuhiro Ôtomo's seminal 1988 anime Akira, and the revolution Akira heralded for the popularity and scope of the anime genre in Japan.*

I'm going to take fifty words to summarize a plot that most have described as incomprehensible--I'd suggest that there's a semantic difference between "obscure" and "incomprehensible" in that one is difficult and the other is nonsense. Final Fantasy: TSW, I believe, leans towards the former. Here goes:

The last remnant of a dead planet strikes Earth, releasing a horde of unquiet alien spirits that harvest humanity's life essence (soul?), driving mankind into heavily fortified "barrier cities" while dividing between those looking for a scientific solution, and others looking for a military solution to the alien menagerie.

The execution of this straightforward story involves a young doctor, Aki (voice of Ming-Na), and her mentor, Dr. Sid (Donald Sutherland), trying to complete an organic wave pattern comprising eight parts; theorizing that as the aliens are mostly energy and requiring of organic energy for sustenance, the key to repelling their threat lies in biorhythms rather than fire and brimstone. On the other side is General Hein (James Woods), a hawk who believes that a new space-based weapon will be powerful enough to destroy the alien threats at its epicenter. Alec Baldwin, Ving Rhames, Steve Buscemi, and Peri Gilpin round out the cast as a small commando unit protecting Dr. Aki and Sid in their harvest/research efforts.

The animation is simply wonderful--it never really gives the illusion of reality, but does succeed in evoking a possibility of reality. It is, in other words, a style of animation that holds particular currency in science-fiction: it convincingly creates a hypothetical world and peoples it with identifiable protagonists. The characters are well-sketched, though shorthand sketches they remain (reminding most often of James Cameron's Aliens during the action sequences and Cameron's The Abyss in the philosophical sequences), and while the voice actors acquit themselves admirably, the bulk of their dialogue is beleaguered by somewhat unnecessary plot clarification. That the same mainstream critics falling over themselves to laud the insulting and dim-witted Atlantis are, this week, elbowing to be the first to excoriate Final Fantasy: TSW for being truth-seeking and green is disquieting, to say the least.

Final Fantasy: TSW is fascinating. It is a glimpse into the future of a specific type of storytelling with a particularly Japanese sensibility. No other genre outside of anime is as invested and eloquent in blending cyberpunk (Gibson's Neuromancer is tirelessly honoured in the film's sets and conclusion) with a melancholy ecological concern/nostalgia that is unique to the only civilization on Earth that has been the victim of an atomic weapon. Similar in tone to Mamoru Oshii's fantastic Ghost in the Shell (the source of most of the images in The Matrix), Final Fantasy: TSW isn't flawless, but it shares its failures with much of anime: too much exposition, occasionally clumsy dialogue, and over-length. It's an overwhelming success in tone, image, and dedication to genre, if somewhat of a failure in regards to its over-explanation of the concept's almost Buddhist simplicity. Though I liked it a good deal, Final Fantasy: TSW feels like a rough draft--something tentative and overreliant on the familiar, fearful of the receptiveness (and tolerance) of its new audience. The film tests boundaries instead of breaking them, and that anticipation for the sublime, eternally unattained, taints the ultimate impact of Final Fantasy: TSW. All the same, if it's not as good as (nor even as tight as the somewhat loose) Ghost in the Shell, Final Fantasy: The Spirits Within deserves to be spoken of fondly, in the same company. Originally published: July 11, 2001. 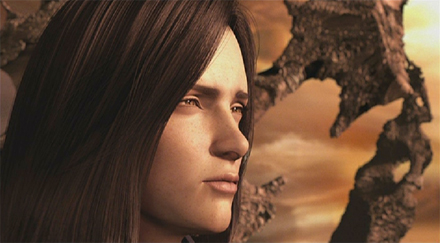 THE DVD
by Bill Chambers The film looks gorgeous on DVD, but then you knew I'd say that. The sound? Phenomenal. Hooda thunk it? Square's Final Fantasy: The Spirits Within comes to us on DVD with a 1.85:1 direct-to-digital anamorphic transfer, and the result is close to the perfection of Disney's Pixar DVDs (A Bug's Life and the Toy Story films). Minor, nay, negligible, compression artifacts are present in the least detailed of backgrounds--they're not likely to wipe the awestruck grin off your face. The Dolby Digital 5.1 soundmix, supervised by Cast Away's Randy Thom, is showroom material through and through because it makes full use of the heightened reality afforded by the story and the CGI. Aki's dream sequences take aural precedence over the action sequences for their hallucinogenic quality; they do more with the multi-channel environment than just ricochet bullets between the split-surround speakers, and they can exhibit bigger bass than the explosion-heavy scenes, particularly chapter 8's example. Regrettably, Elliot Goldenthal's isolated score (with discerning commentary from the composer between arrangements) is only in 3.0 surround (front left, front right, non-descrete rears).

The Final Fantasy: The Spirits Within Special Edition DVD doesn't seem very stacked, even though it's a two-platter deal, until you start poking around in there. With my evenings devoted to exploring the contents, the set took me from about Friday to Wednesday to devour, discounting my initial viewing of the film itself, which was frequently interrupted by my freeze-framing in appreciation. Let's start with Disc One (opening with a custom Columbia TriStar logo), where we first realize that the extra features, while plentiful, require an almost psychic sensibility to determine what it is you're about to witness. "Boards/Blasts" is one such supplement: who would presume that it leads to a feature-length version of Final Fantasy: The Spirits Within composed of alternating rough sketches, crude animatics, and generally unfinished bits of business? "Boards/Blast" comes with optional factoid track (à la infinifilm's trivia windows) and (optional) commentary, participants unknown, although I presume they are the same folks in the second yak-track for the real film, animation director Andy Jones, editor Chris Capp, and staging director Tani Kunitake. The information imparted by the pop-ups is of less specialized interest than the patience-testing temp cut of Final Fantasy: The Spirits Within.

The first disc's actual feature-length commentaries are delivered by co-director Sakakibara, sequence supervisor Hayashida, phantom supervisor Noguchi, and sets and props supervisor Maruyama; and on a separate track, Jones, Capp, and Kunitake. The former is in Japanese with English subtitles, and it's decorated with self-effacing humour and many apparently culturally specific chuckles. (The description of Aki's breastplate as an "iron bra" brings down the house.) The latter participants are more straightforward, describing the challenges we wouldn't think of--that motion capture could only record two or three people at a time, for instance, limiting character interaction. Oddly, the Japanese and American teams rarely refer to each other, as if the film were not an international co-production.

Disc Two has but two initial options: "Play Documentary" and "Highlights Menu". The documentary, automatically selected if the main menu remains idle, runs thirty-minutes and contains a multi-angle brancher that has earned the industry-wide shorthand of "White Rabbit" for coming to prominence under that name on the Matrix DVD. The 'white rabbit' pod-clicks elaborate on techniques raised in the doc, such as "face wrapping" (wherein digital flesh is painted flat before being virtually stretched like canvas around a wireframe skull). If brevity is the source of wit, this doc might have you guffawing, and it forgets to credit many of the interviewees; there needed to be greater discussion with Randy Thom and additional comments from the Japanese crew, in my humble opinion. (And yes, Aki's damn hair is discussed. "She doesn't have very many bad hair days," jokes one animator.) Note: The main menu's translucent blue border constantly surrounds the extras on Disc Two.

The highlights of the "Highlights Menu" are not the "white rabbits" compiled, but still more making-of material. Here's a rundown:

Character Files
Mixes fictitious backstory with earnest explanation of how they arrived at Aki, Gray, Dr. Sid, Hein, Ryan, Jane, and Neil, narrated by a soothing, futuristic female voice. Hein's is my favourite because he most resembles his creator; clearly, there's something Freudian going on at Square.

Final Fantasy ShufflerÔ
Re-cut the conference room debate using its finished takes, ostensibly to better appreciate an editor's job--yet an editor's job is not to put stuff in order, or at least, not solely.

Trailer Explorations
An unbilled marketing man from Square introduces three trailers for Final Fantasy: The Spirits Within, with developmental insights.

"The Gray Project"
Gray as in the colour; a montage of ghostly design tests.

Matte Art Explorations
A thickly-accented animator talks matte paintings--now done for most movies in-computer instead of on sheets of glass--in abstract terms.

Joke Outtakes
A very old gag crudely drawn, these are quite often hilariously sick and twisted.

Compositing Builds
A curious montage of simple images being layered with particulars.

Disc Two is rounded out by an Easter egg--a funny "Thriller" homage that is definitely the product of too many late nights--plus DVD-ROM stuff: a unique script-to-screen comparison ("Interactive Film Exploration," it places the "Boards/Blasts" rendition of Final Fantasy: The Spirits Within in a centre window and subtitles it with screenplay passages); a virtual tour of Square Pictures (more or less an excuse to stow the remaining Final Fantasy: The Spirits Within arcana somewhere); a link to the film's website, and a Bridget Fonda--I mean Aki--screensaver. This is a loaded SE, but it may be a bit too inside for some tastes. (It was mine, even if CGI ain't a total mystery to me.) A word of caution: Final Fantasy: The Spirits Within debuts on home video at an unfortunate juncture, and its depiction of a post-apocalyptic New York City (with standing Pepsi billboards) could upset sensitive viewers. Originally published: October 12, 2001.

* Let me disclaim that I'm not particularly a fan of Akira while recognizing its importance in the nascence of the Japanese animation genre. It's just too obscure and so packed with meaning that it's ultimately meaningless. Still it, like Ghost in the Shell and other sci-fi animes, it errs on the side of too much information and not, as Disney does, on the side of only stupid and inconsistent information.