by Bill Chambers Dr. Seuss' How The Grinch Stole Christmas? More like Dr. Strangelove's. The Ron Howard film version of the children's perennial has horror-movie limbs that spring up independently of Seussian intent, the most extended of them going by the name of Jim Carrey, who wants to be the only Grinch remembered and marks his territory with piss and vinegar. Then there are the subversive asides, reckless stabs at hipping up a classic story that hadn't fallen out of fashion in the first place. So miscast as a director, Howard is guilty of trying too hard; so well-cast in the lead role, Carrey is also guilty of trying too hard--or maybe not hard enough. Improvising ten topical jokes to every five that succeed while smothered by a fuzzy-wuzzy bodysuit, Carrey suggests a green Robin Williams in maximum sellout mode.

The Seuss book is one of literal poetry: rhymes that tell of Whoville and its Quasimodo, the reclusive, embittered Grinch. Situated atop Mt. Crumpet with only a dog named Max for company, he plots to take Christmas away from the seasonally happy Whoville residents below. But when their merriment perseveres in the face of having had their gifts and Christmas paraphernalia stolen, The Grinch is moved: The Whos are a spiritual, rather than commercial, breed. The End. Seuss's verse lent itself to being translated as an animated TV special--he'd written a lean, festive allegory and populated it with grotesques. In the late-Sixties, Looney Tunes veteran Chuck Jones directed a half-hour adaptation for CBS that has, for all intents and purposes, eclipsed its source material's popularity.

How do you make How The Grinch Stole Christmas last the length of a feature? You don't. But they tried anyway. There is an early scene in which Carrey's Grinch reclines in a chair and considers his next move: It goes on about a second longer than it should, and that superfluous space feels like an eternity of hemming and hawing from the filmmakers. Ultimately, in order to satisfy the larger canvas of the cinema, Seuss's moral informs The Grinch's motivation for stealing Christmas, and that method of working backwards turns the whole tale on its ear: Now, Whoville is a mercantile village where greedy, pushy people live to shop and hoard, which somewhat validates The Grinch's titular crime!

It smacks of an effort to keep The Grinch "sympathetic" (the Hollywood buzzword). Frankly, The Grinch lost me on that front when he torched Whoville--halfway through the picture, before the idea of snatching X-Mas has occurred to him. Dr. Seuss' How The Grinch Stole Christmas is disturbing in its cynicism: Internet gossipers didn't think Opie was up to the task of achieving a suitable malevolence, and Ron Howard reacted, if I may psychoanalyze from my armchair, from the core of his manhood. A key-party reference, a pair of Cronenbergian shears, and lots o' cleavage desecrate Seuss and spell out a yearning to be accepted by the in-crowd. Dr. Seuss' How The Grinch Stole Christmas is a dark movie, all right, but I don't think it's the same dark movie that web-types challenged Howard to craft. It's just an ugly piece of work. THE DVDs
Dr. Seuss' How The Grinch Stole Christmas arrives on DVD in widescreen and full-frame Collector's Editions, the latter packaged alone or in a "DVD Interactive Playset", a handsome pop-up book. It folds out to display three separate dioramas: "The Grinch's Lair," "Christmas Morning in Whoville Square" (look in the sack for the disc, which is sealed in a custom container), and "The Whoville Post Office." I suspect that most moms and dads will find themselves surreptitiously shifting the little arrows and winding the "advent-style countdown clock"--it's a lot of old-school fun. Green ribbons are attached: tie them tight to keep the pages open for display. 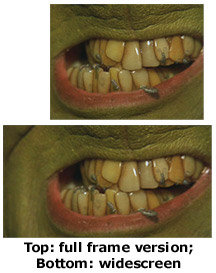 Extravagance has been largely absent from DVD, so give Universal points for ingenuity, although those who prefer OAR are out of luck if they want the playset--plus, I doubt the wisdom of targeting Howard's Grinch at littl'uns in the first place. (Before I forget, a trailer for next spring's "enhanced" (shudder) E.T. re-release precedes the film on all DVD copies of Dr. Seuss' How The Grinch Stole Christmas.) At any rate, in an A/B comparison, the difference between the 1.85:1 anamorphic widescreen and full-frame versions was inconsistent: Shots that contain special effects--some 600 of them, totalling 43 minutes--were shot in VistaVision and thus suffer vertical cropping at the full-frame aspect ratio (1.33:1). On the other hand, much of that side info is unessential at best (see example), and the non-F/X photography gets matted on the top and bottom to become 1.85:1. It's a trade-off in either direction, though I generally don't feel as if I'm watching a legitimate, post-1953 theatrical release if the image meets the four corners of my 4:3 television.

The duelling video transfers are identical saturation- and contrast-wise, but compression artifacts are more noticeable in fullscreen, particularly along the edges of the main titles. Because I'm not a fan of Don Peterman's soft-focused, Crayola-coloured cinematography, I concentrated on how it was authored; the answer is "very well indeed." Both discs offer a choice of Dolby Digital 5.1 and DTS 5.1 soundtracks; the film's mix draws a lot of attention to the surrounds--it's aggressively discrete, as when The Grinch's echoes talk back to him, or when he drops his mask in the stacking room of the post office, a startling rear-right clink. Dr. Seuss' How The Grinch Stole Christmas plumbs the depths of the LFE channel infrequently, though The Grinch's climactic heartbeats punch us in the gut--or pound, in the case of DTS. The disc also comes with DVS ("Descriptive Video Service") audio, i.e., narration for the blind, in Dolby Digital 3.0. I must say I was mesmerized by it during my brief sampling--even the distributor logos are described!

The DVD's supplementary material tantalizes but doesn't much nourish. I suspect it was geared towards children and newbies.

Spotlight On Location (8 mins.)
A puff-piece that's shorter and less glossy looking than Universal's usually are. Its main function seems to be to summarize the remaining featurettes.

Deleted Scenes
Six in all, the longest an extension of the opening sequence that's really quite heartless: The Grinch sneaks around Whoville tripping bystanders with marbles. No reason is provided for why any of these were elided.

Who School (6 mins.)
We learn that many of the Whos were gymnasts, and that everybody went through a training period complete with trampolines to devise a body language for their character.

Makeup Application and Design (7 mins.)
Latex guru Rick Baker talks about the pitfalls of following Seuss' original drawings--they often conflicted with what we'd perceive as hideous in a three-dimensional realm. The early Who and Grinch tests shown here are intriguing, and a better DVD would've dedicated a gallery to them.

Seussian Set Decoration (6 mins.)
The geometry of the sets and props may capture the spirit of Seuss, but the colours are all wrong, in my humble opinion. An interesting segment nonetheless, with Audrey Geisel (a.k.a. Mrs. Seuss) getting the last word in.

Visual Effects (10 mins.)
F/X supervisor Kevin Mack is the sole interviewee. While I don't like some of The Grinch's technique, I can't deny its sophistication with regards to computer-generated extras and backgrounds. Truly groundbreaking stuff being done at Digital Domain.

Rounding out the standard bonuses: Faith "Yeti" Hill's video for "Where Are You Christmas"--is that frommage I smell?; four "Wholiday Recipes" (the peppermint-patty brownies sound delicious; "Martha Whovier's Designer Onion Wreaths" sound adventurous); "By the Numbers," How The Grinch Stole Christmas movie statistics, e.g. the amount of fake snow used by the production could cover nine football fields; the theatrical trailer; "The Grinch's Special Offer" (say what? It's a couple of commercials for Universal's theme parks); production notes, cast and crew bios, recommendations, a preview of the "Grinch" video game; and Universal's standard DVD Newsletter.

The fat lady has yet to sing: On the main menu, you'll see a button called "Max's Playhouse." Click it and you'll find a section for "fun & games" and another for sing-alongs. The tykes should enjoy changing The Grinch's outfits (even I admit that he amuses in a tuxedo) and finding the right word to complete phrases in "Rhyme Time." "Care and Feeding of a Grinch" is condescending pretend-Seuss verse that Max the Dog reads to you if you so choose (ughs! all around), and I couldn't find the mindset for "How Do I Find Things?" As for the sing-alongs, there are three: the film's renditions of "You're a Mean One, Mr. Grinch" and "Where Are You Christmas," plus Hill's clip again but with Karaoke subtitles.

Lastly, a DVD-ROM Whoville interface is spectacular and occasionally creepy. As you decide where to click (caveat clickor: there are a handful of dead-ends), an excellent fact-track pops up at the bottom of the screen. Visit one of four areas here for some extra goodies: "Post Office" (a playable demo of the curious "Grinch" video game from Konami; soundbites, plus a Grinch "screenmate"); "Cindy Lou Who's House" (a Grinch screensaver; the recipes, here printable; and a custom Grinch browser); "Theater" (a few of the DVD proper's supps recycled); and "Mt. Crumpit" (production notes déjà vu; cast and crew bios déjà vu; and "Who Pics"). Perhaps it wouldn't be fair of me to say bah humbug! for the disc's lack of the film's screenplay, but I was certain it'd be included. Probably just as well. Originally published: October 21, 2001.