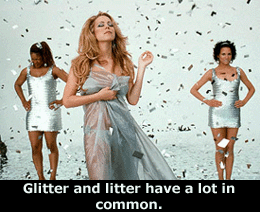 by Walter Chaw About halfway through Glitter's bloated running time (105 minutes of unique hell), a foreign video director sagely complains: "The glitter can't overpower the artist!" The two problems with Glitter are that the glitter does overpower the artist, and that the glitter itself is preposterous, dreary, and dull. Billie (Mariah Carey) is enlisted as the back-up singer for an entirely talentless woman, and her voice is hijacked in a Singin' in the Rain intrigue, natch. But even as I was resigning myself to a customary "VH1 Movies That Rock" piece of dreck about the girl singing behind the curtain getting rewarded for her saintliness on the opening night of a national tour, Dice the DJ (Max Beesley) swoops in and makes Glitter an interracial version of screenwriter Kate Lanier's own What's Love Got To Do With It?. Only Glitter's Ike is a pretty nice guy, despite his jealousy/management problems, and this Tina is as expressive as a person on a horse's ration of Thorazine. When Billie tells Dice, after some very chaste lovemaking, that she has trouble trusting people, I whispered to the screen, "Honey, you probably shouldn't start at a guy named 'Dice' who sports a large gold pendant that says 'DICE.'"

Before you know it, Billie has a number one dance hit (a remake of Cherelle's "I Didn't Mean to Turn You On"--later a Robert Palmer smash) and is under pressure from the evil record companies to deliver a few more tracks so that they can release an album. The strain of writing songs and being famous tears Billie and Dice asunder, a dumb prologue is resolved with a dumb conclusion, and Billie's best friend caricatures (jive-talking black woman, sex-crazed Latina) outstay their welcome to such an egregious extent that when Dice cruelly calls the first "big butt" and the second "mouth," a quiet cheer went up in the audience.

Glitter, destined for bad cinema lore, has a sequence in which the leads somehow compose a bad song together from across town (a scene aped with no discernible irony from the Apollonia Six segment of Purple Rain), characters who swim in and out of the action (neither their entrances nor exits causing a ripple), and jarring, unearned, incoherent revelations. It gets worse: Early on, a little is made of Carey's--Billie's--biracial background. In a flashback prologue that actually plays pretty well, a freshly-orphaned Billie is asked by two little orphan girls (possibly her friends later in the film) what she is. "Mixed" is her reply--and, appropriately, no more is ever made of it. Verging on inappropriate is the fact that of the four "non-mixed" black characters in the film, one is a murderous rapper (clearly modeled after Puff Daddy), one is an Uncle Tom working for the record company, one is a "talk to the hand" burlesque, and the last is a supposedly famous singer revered by Billie, but whom we find insignificant. Glitter doesn't have to be a strong statement of racial sensitivity, however it should exhibit some racial sensitivity.

And through it all, Glitter isn't disturbing because it provides a glimpse into a parallel universe where Barbra Streisand did Purple Rain. No, Glitter is disturbing because it is an autobiographical melodrama about the steady road to mental collapse so recently travelled by Mariah Carey herself. Playing rags-to-riches diva Billie (clearly named after Billie Holliday and eerily recalling that chanteuse's own stint in the loony bin), Carey is prodded, medicated, and arranged by her retinue of wranglers and feeders into progressively more perverse tableau vivants. She resembles a dazed mannequin under a pound of makeup and unkind klieg lights, desperately and conspicuously trying to keep the camera on her right profile, and wriggling her grotesquely painted-on eyebrows to occasionally and obliquely express some monstrous simulacrum of grief, anger, happiness, relief, love, fear, or pensive consideration. Apparently fuelled by a Geppetto-like desperation to gift his wooden charge with the illusion of life, director Vondie Curtis-Hall obscures Carey's dazed clockwork with flashy edits, gratuitous "bullet time" effects, puzzling slow-motion interludes, and meaningless time-lapse transitions scored with noises of airplanes taking off and engines revving.

New songs penned by the emotionally shattered Carey for Glitter show her fatigue, lacking both the R&B revivification that marked her early career and the irritating and empty vocal gymnastics that has characterized her more recent work. The main theme of the film is, in fact, so excruciatingly maudlin that it would feel right at home in the tear-stained journal of a depressed fifteen-year-old fresh off her first read of The Bell Jar:

You can almost see the yellow wallpaper poking through Carey's ruined psyche. If Glitter is a cry for help from a disintegrating personality (and it can be viewed for profit in no other way), then someone needs to feel ashamed for ignoring and gaining from Carey's pain, and for foisting this shambling monstrosity on unsuspecting 12-year-old girls, who will eventually grow tired of being underestimated. Originally published: September 26, 2001.