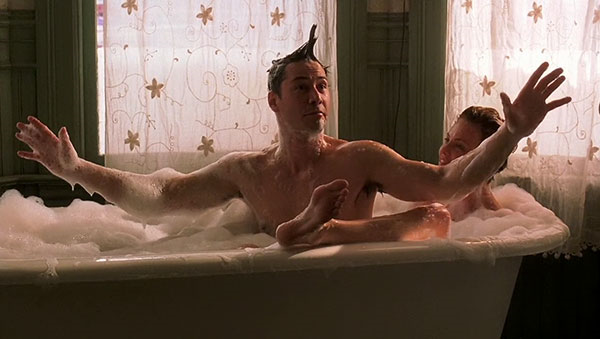 by Walter Chaw After Sara Deever (Charlize Theron) and the horribly named Nelson Moss (Keanu Reeves) meet-cute during a test at the DMV, Nelson offers to pay all of Sara's expenses for a month to compensate for his part in her failure to have her license renewed. Indignant, Sara wonders aloud if Nelson treats all women like hookers. Hippie chick Sara, by the way, has no visible means of support, lives in a giant apartment in San Francisco, and bangs a different rich man for a month every month in some kind of Bull Durham sexual scholarship lottery arrangement. I can only assume that Sara's specious offense at Norman's innocuous "implication" is that she's amazed that it shows.

A remake of a 1968 Sandy Dennis tearjerker that no one really remembers (and for good reason), Sweet November is a grotesquely maudlin bit of unforgivable tripe that has as its only surprise the shocking fact that it was directed by Pat O'Connor (Circle of Friends) and not Nora Ephron or Chris Columbus. Odious and embarrassing, the film is a collection of awkward Hallmark moments shot in the golden autumnal soft-focus glow of feminine freshness commercials and Rod Stewart music videos. That it remains at least partially watchable is entirely a product of the sick fascination/tolerance one develops for Keanu Reeves's mind-numbing inability to act, for even a moment, like a human being.

When Sara's not stealing bags of puppies or doing cartwheels on the beach with three standard white poodles (she starts with five; two apparently drag themselves off for insulin injections), she's giving painfully earnest monologues about seizing the day and living life for the moment. Norman, as played by Keanu, is one of those assclowns with a cell phone attached to his face who is more interested in obsessing over a stupid ad-exec job than in finding the love of a good woman (see also: Mel Gibson in What Women Want). I guess he'll settle for the love of a kept woman he gets for being her sugar daddy du jour.

Helping things jerk along are Jason Isaacs as a wacky transvestite Scot (who, like all movie gay men, has nothing better to do than tend to wounded whores with hearts of gold), a little urchin who needs a daddy (Liam Aiken--he also stank in Stepmom, a film that was directed by Chris Columbus), and Greg Germann (television's "Ally McBeal") as the late-film reminder of the kind of fathead Nelson used to be before he met Sara. It's quickly clear that Sweet November is not one unwieldy high-concept formula film, but several unwieldy formula films chewed up and regurgitated as a disquieting mess of unabashed manipulation and howlingly awful execution.

Sweet November's not-so-big revelation arrives about halfway through, when what you've suspected all along is confirmed: Charlize Theron's moonbeam space cadet is terminally ill, thus begging the question of whether it's still necrophilia if two corpses have sex with each other. Questions just as thorny arise concerning how Keanu Reeves can fit an automatic dishwasher into a giant Santa bag (it's giant) and, furthermore, how Keanu Reeves can wrestle a giant Santa bag with an automatic dishwasher in it up a fire escape and through a second-story window. I was also wondering such things as how director O'Connor could have thought it a good idea to have Keanu Reeves maniacally pitching a sexually-charged hot dog commercial to a boardroom of incredulous hot dog executives and, later, croon a horrific love song to poor, incredulous Sara without a hint of self-knowledge or irony.

Sweet November is a special kind of film, so immaculate in its ineptitude that it actually inspires a fair amount of admiration for consistency. It's not every day a movie comes along that fatuously overuses dewy Enya cues while awkwardly inserting a Stuart Little toy regatta as some sort of twisted Big Brothers of America advertisement and employs a dropped salami as the meet-cute device that introduces its lovers to each other. I suspect it takes a good deal more energy and imagination to think up garbage like that than one presumes.

THE DVD
Warner's widescreen (1.85:1) anamorphic DVD transfer of Sweet November is crisp yet unremarkable. There is some minor pixelization during the Keanu Reeves-sings portion of the festivities due, in all likelihood, to the video technicians' inability to sit through it. Otherwise, the soft golden hues are, well, soft and golden, and Nelson's evil, pre-Sara existence comes through in green and blue suffusions that director O'Connor overuses as symbols of the sterility of life without any woman yearning to sleep with you for being an asshole who happens to resemble Charlize Theron. The Dolby Digital 5.1 surround is more than serviceable for what really amounts to a lot of swelling Enya, K.D. Lang, and Barenaked Ladies tunes narrating the numerous VH1 falling-in-love, cold-hearts-thawing montages that litter the film. The saving grace of which is, of course, the temporary relief from Reeves and Theron's line readings that are rendered with unfortunate digital clarity.

A ten-minute "documentary" reveals itself to be composed mostly of self-congratulatory soundbites from the director, Reeves, and Theron, intercut with snippets of an adult-contemporary soundtrack. There's nothing to be learned here except for the capacity that many in Hollywood have for spin-doctoring and self-deception. In fact, calling "Sweet November, From the Heart" (bizarrely titled "Studio Extras" on the special features menu) a behind-the-scenes documentary is akin to calling the trailer a "making-of" documentary. The abovementioned theatrical trailer, which should be sufficient warning for anyone, rounds out the disc. Originally published: August 7, 2001.