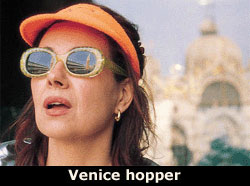 by Walter Chaw There are great chunks missing from Bread and Tulips, story transitions that appear inconsequential until one finds them neglected. An action is announced and several scenes later we are left to presume that the action has been performed; an event occurs and several scenes later we give up waiting for the reaction. Nowhere is that discrepancy more jarring than at the conclusion, when our heroine is spirited away from her family and loved ones and deposited in the middle of a different movie. There is a considerable problem with a film that insists on holding your hand through score or ham-handed direction; on the flipside, there is a considerable problem with one that discards basic narrative cohesion in favour of a calculated whimsy. A film like Bread and Tulips.

That being said, Bread and Tulips (the big winner in this year's Italian Oscar race, the "David Di Donatellos") is an agreeable light-hearted formula movie about a weary housewife who, in escaping the humdrum of her marriage to a bellicose bathroom fixtures salesman and their two surly teenage sons, brings her sunny brand of joie de vivre to a collection of lifeless sad-sacks in Venice. It is as sappy and unlikely as Summertime, that other questionable romantic comedy set in Venice, and boasting of the same dappled, golden-hued filter that lends every shot a dreamy picturesque quality. It is only through the grace of that tacit agreement to view Bread and Tulips as an utterly improbable middle-aged romantic escape fantasy that forgives it its multitude of sins.

While on a bus tour through Rome with her family, frumpy haus frau Rosalba (Licia Maglietta) gets left behind at a rest stop. Rosalba decides to hitch a ride home by way of Venice, a place she's never visited despite her proximity to it. Once there, Rosalba finds that she enjoys her blossoming freedom. She finds a couch to sleep on in the home of a depressed restaurateur Fernando (Bruno Ganz) and a job arranging flowers for a crusty old florist (Felice Andreasi). She befriends Fernando's wacky "holistic masseuse" neighbour Grazia (Marina Massironi) and takes up the accordion, which she has not played since a wee lass on her grandpappy's knee. Justifiably enraged, her husband hires a plumber who loves detective stories to track Rosalba down in Venice, portly mama's boy Constantino (Giuseppe Battiston). It can be of little surprise that Constantino, as lonesome and pathetic in his way as Rosalba was in hers, has Venice's (and Rosalba's) magic work on him as well.

Hamstrung by convention, a lugubrious pace, three clumsily-handled dream sequences, and the abovementioned narrative choppiness, Bread and Tulips remains so guileless at its core that it's difficult to dislike, although its technical and scripting problems do their best. A good actors' director, Silvio Soldini seems flummoxed by the prospect of telling a slight story with economy, content to allow his cast to interact in an endless series of cutesy scenarios. The film is also so clearly about Rosalba and her mid-life crisis that the travails of her abandoned family are handled with an afterthought, a manufactured conflict, and eventually a quick edit that speaks volumes of Soldini's disdain for Mimmo and the kids. In fact, the most we get of the husband after the brief prologue are four scenes: two involve him screaming at co-workers or Rosalba, one involves him trying to get his mistress to iron his shirts, and the final shows him forgiving Rosalba for abandoning them and shacking up with another man. Mimmo is made first a monster, then an absolver of sin. This beleaguered tactic suggests a belief in Soldini that his audience is incapable of an ambiguous heroine but just daft enough to be manipulated in such a manner for the umpteenth time.

Bread and Tulips is an attempt to portray how serendipity and fate conspire to bring a good person to a favourable end. If it's a fairytale, then it's one without any hint of the menace that marks the best of them. There is never a moment in which we fear for Rosalba's safety, no matter how many amazingly stupid situations this bumbling woman gets herself into. When each precious romantic cog cascades, its successor is met with a sort of drugged acceptance. We've seen this movie way too many times in countless permutations, and its lack of originality is injured by the general poorness of the direction. I fear the public's appetite for comfortable drivel is indefatigable enough that the pleasant performances in Bread and Roses will charm a great many people regardless of its shortcomings. Personally, I would have benefited from a great deal more sustenance from the bread of the piece while suffering a great deal less time spent in the careful arrangement of tulips. Originally published: August 17, 2001.