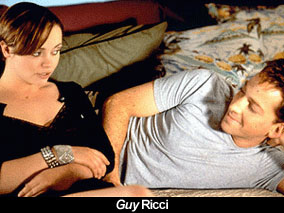 by Walter Chaw Produced by Don Roos, the man behind the intelligent interpersonal dynamics of Bounce and The Opposite of Sex, Julie Davis's film All Over the Guy is based on a Dan Bucatinsky one-act stage play, and it never quite breaks free of its theatrical roots. All Over the Guy is a rapid-fire, talk-driven, inverted sitcom that promotes gay friends to the forefront and pushes their hetero pals into the background--a film that admirably attempts to demystify a homosexual relationship by taking parts originally written for a man and a woman and giving them to two men. Ironically, in attacking the stereotypes reserved for the homosexual community, it endorses the stereotypes of the light romantic comedy, making All Over the Guy the first gay-themed indie as predictable and unlikely as any soupy Nora Ephron fantasy.

Eli (writer Bucatinsky) is best friends with Brett (Adam Goldberg). Eli is a newspaper editor and gay; Brett is a furniture designer and not. When Brett meets the girl of his dreams in Jackie (Sasha Alexander), Jackie suggests that her best friend Tom (Richard Ruccolo), also gay, be set up with Eli. Following the formula for such things, the four engage in various Generation X-fuelled pop culturally savvy banter. Discussion topics include Eli's obsession with Planet of the Apes and what Brett calls Jackie's "Clockwork Orange-cum-Ikea" interior-decoration scheme. (Bucatinsky's dense dialogue is delivered in a nervous, affected way that is used to a more laconic (and greater) effect by Hal Hartley.) Brett and Jackie find instant bliss and wedding bells, while Eli and Tom struggle with commitment issues and extensive childhood emotional scarring en route to finally discovering what we've known from the start: that Harry was, indeed, meant for Sally.

All Over the Guy is mannered like a screwball comedy. It falls on the old standbys of a crusty old lady who swears like a sailor (Doris Roberts), fish-eyed flashback sequences of hippie pop psychology parents (one of whom is overplayed by Andrea Martin) for the emotionally-fastidious Eli, and of drunken society parents (also overplayed, this time by Joanna Kerns and Tony Abatemarco) for the emotionally-crippled Tom. While Eli is presented with a mom who embarrasses him with answering machine messages concerning testicular self-examination (too obviously transcribed from a dozen similar gags from a dozen similar sources), Tom is given a burden of psychosexual weight that manifests itself in unlikely rages and unlikelier reconciliations. We like the two characters well enough, though.

To that end, All Over the Guy is to be credited with offering a gay relationship devoid of hang-ups concerning sexual orientation. The real weakness of the film is that its "queerness" is its only aspect free from a feeling of "been there, done that." A sex scene in the middle of the proceedings featuring an admission of passion and love is among the most affecting of its kind I've ever seen, but, coming as it does (sandwiched between long stretches of overheated soliloquies and overly precious rejoinders), the overall feeling of the piece remains one of equal parts mild amusement and mild frustration. All Over the Guy wanders like this for most of its running time, touching base at one end with a kind of emotional connection that is very sweet and human, and glossing vital transitions with a sort of ramshackle recklessness at the other.

Soaring in its quieter moments (Tom leaves a present of a Dr. Cornelius doll at Eli's doorstep, with Eli subsequently resisting telling Tom that it's more valuable in the box), and featuring a trio of nice, if disposable, cameos by Roberts, Christina Ricci, and Lisa Kudrow, All Over the Guy is a vaguely awkward, vaguely desperate and forced film, typical in every possible way of the sub-genre of intelligent twenty-something angst, save for the fact that its lead couple-in-peril is homosexual. Unfortunately, a gay film that is signified by a studied mediocrity and pat touchy-feely solutions to thorny psychological schisms is the logical end product in the struggle for a true cinematic equality. Heterosexuals, after all, have been making the same awful glib junk for years and years.

Now that Bucatinsky has presented gay characters every bit as theatrically neurotic and precious as their straight counterparts, my hope is that he'll turn his talents to creating a path for these two very likable fellows that isn't quite so pounded down by decades of formula. Far from awful, All Over the Guy has a few laugh-out-loud moments and a couple of scenes that are tender and revelatory. More's the pity, then, that it never pulls more from its premise than a canned rehash of apocalyptic romantic holocausts and their too-eloquent moments of fated and convenient resolution. Originally published: August 24, 2001.