Editor's Note, December 24, 2012: Again, this material is pretty stale. Mostly reposting it for posterity, something I can't always bring myself to do when it comes to the early reviews. 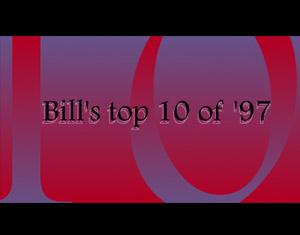 1. The Ice Storm- Suburbia in most films is portrayed as a white picket fence surrounding a dozen Addams families. The Ice Storm is less eager to impress us with quirky kinfolk--it places two neighbouring, dysfunctional families under a microscope. Witty without being jokey, sad without being blatantly tearjerking, this is that sort of film so unforgiving that audiences stayed away in droves.

2. Chasing Amy- Kevin Smith managed to make a film about a straight man who falls for a lesbian without condescending to either party, while viewing both of them with eagle eyes. An honest love story--as in life, when our protagonist's confession of adoration is met with a kiss in the rain, it's only the beginning.

3. Titanic- The central love story is deliciously syrupy, as crowd-pleasing as its inevitable show-stopping finish that, despite said inevitability, is a reality we don't want to face: What if Billy Zane survives?

5. As Good As It Gets- Jack Nicholson and Helen Hunt's memorable turns are supported by a dialogue-perfect script and fast-paced direction by James L. Brooks.

6. Donnie Brasco- This particular gangster film stands out amongst those of recent years because of British director Mike Newell's fresh-faced lensing and Johnny Depp and Al Pacino's galvanizing performances. Like Miller's Crossing, the last great mob movie, Donnie Brasco is destined for rediscovery on video and cable.

7. Jackie Brown- Tarantino's latest reveals a tenderness beneath badasssss posturing. Jackie Brown is a subdued piece that attempts to shock you not with graphic violence or tough talk, but with the sight of two middle-aged people--of mixed-race, no less--finding each other in the midst of a complex financial double-cross. Fine writing.

8. The Edge- The most underrated picture of the year. An atypical man versus nature flick, thanks to offbeat performances from Anthony Hopkins and Alec Baldwin, genuine, developed suspense, and a willingness to criticize its target audience: chest-beating macho-men.

9. The Sweet Hereafter- Despite the weightiness of the material and a mishandled incest subplot, Atom Egoyan's tale of the effects of a fatal school bus accident on the town of Sam Dent, B.C. is always absorbing, engrossing, and surprising.

10. She's So Lovely- I chose She's So Lovely because of its fearlessness. It's not a terribly coherent film, but the performances and chemistry of real-life husband and wife Sean Penn and Robin Wright guide us through even the most unfathomable character motivations. Love stories were big in 1997, and this was the most intense of them.