The rule my wife and I have for our kids about what they can watch is that there are really no restrictions, but the price is they need to have a conversation with us about content before and after. They'll have all the information they could possibly want going in, and then they can make their own decisions as to whether or not they still want to see it. We've taught them there are things they can see in a film that they can never un-see.

We're also very clear that certain films about human cruelty will change the way they feel about the world, and not always in a useful way. My daughter has typically been more adventurous than my son in terms of what she wants to "risk" when it comes to content. She insisted on seeing The Exorcist when she was fourteen, using that teen trump card of "all of my friends have seen it!" Not wanting to make her weirder than we already have, we let her. It didn't bother her. 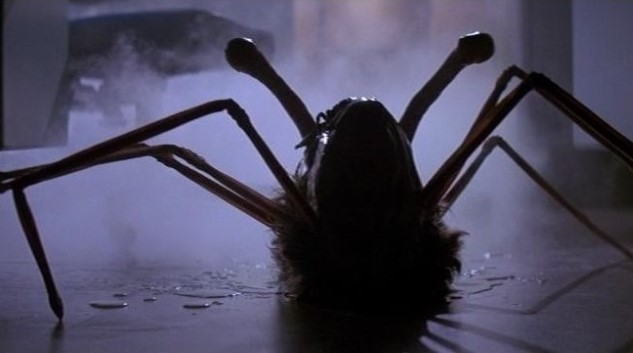 Then she wanted to see Halloween, and we had to shut it off after fifteen minutes because she couldn't handle it. It's interesting to see what pushes someone's buttons and what doesn't. The idea of young women cavorting around in their houses at night in front of de-curtained windows was a bridge too far. Possession by Pazuzu was not a big deal. And so it goes.

My son, who's 14 now, is and always was comparatively cautious in his viewing habits. I can't imagine him wanting to watch The Exorcist. He loved Jaws a couple of years ago--mainly, I think, because we were watching it in a hundred-year-old theatre on Cape Cod the day after we went on a seal watch, where we were warned there might at any moment be a shark attack on that growing population. Recently, though, he confessed to me that the experience haunted him.

So I was surprised when, during this quarantine period, he expressed a desire to watch The Thing.

I'm a hardcore fan of The Thing. He's grown up around Thing posters, and I got him a Thing T-shirt years ago, though he had no idea what it was he was wearing. It was this that finally pushed him to suggest a screening of it. "I don't want to wear that shirt anymore in case someone asks me what it is." And he loves the shirt, so...

I introduced The Thing as one of a series of films John Carpenter made with Kurt Russell and the only one, arguably, that is not a comedy--not counting their Elvis miniseries. I told them it was a remake but ultimately functions more like a sequel. I said both films are based on a premise introduced in a short story called "Who Goes There?" and urged them to consider the nature of the horror of someone you know turning out to be something you don't.

What are the parallels in the current world to this premise of not truly knowing your neighbour--or discovering, perhaps, that your neighbour is not who they appear to be?

I explained how Rob Bottin burned the candle at both ends and how many of his creature effects weren't ready until literally the moment of shooting. Their appearance, in other words, was often a surprise to the weary cast.

This film is pushing 40 years old at this point. For me to understand its temporal proximity: it is as old a film to my children as something made in 1953 is to me.

In what ways is The Thing current?

My kids instantly connected it to how some of their friends' families have been torn apart by the most divisive administration in our lifetimes. Some grandmothers, aunts, and uncles have revealed themselves to be Trump supporters. My daughter marvelled at how a man she had met at a friend's house--an older guy, someone's uncle--was now verboten for his political beliefs. "He didn't seem like that kind of person."

I reminded them of the scene where a computer program calculates how long it would take for a viral contagion to infect everyone in the world, and they were quiet for a while.

"Corona Virus," my son said. Indeed, The Thing is a particularly poignant movie to watch during our pandemic. My daughter observed that the film is about not only the virus, but the kind of aggressive, alien mindset that allows it to spread rampantly.

My son said the movie was about the fear of losing your identity to something else. I asked if there was a risk of that that wasn't extraterrestrial. He said addictions could do that. The wrong friend group. The wrong love interest. Even puberty could make you different. Different how? Different in the sense that you say and do things, sometimes, that seem like someone else is saying and doing them. Sometimes he yells at his mom, he said, and he regrets what he says as he says it, but he's so wrapped up in his emotions that he's not able to stop. I thought that was an impressive bit of self-awareness for a 14-year-old boy.

The key scene in the film is the "blood test"--key enough that I surreptitiously turned my camera phone towards the kids as they watched it. My son's grin got bigger; my daughter screamed and threw her popcorn in the air. Afterwards, I wanted to discuss their reactions. My daughter said she knew something like that was going to happen, but the timing of it is so smart that she was surprised all the same. We went back and looked at it again. I had them note how Carpenter uses misdirection--the test that "jumps" is delivered in a sort of offhand way as Russell's MacReady is in the middle of chastising a different character. I asked my son why he didn't have the same reaction as his sister, and he said that while he was certainly startled, what he felt more than anything at that moment was delight. 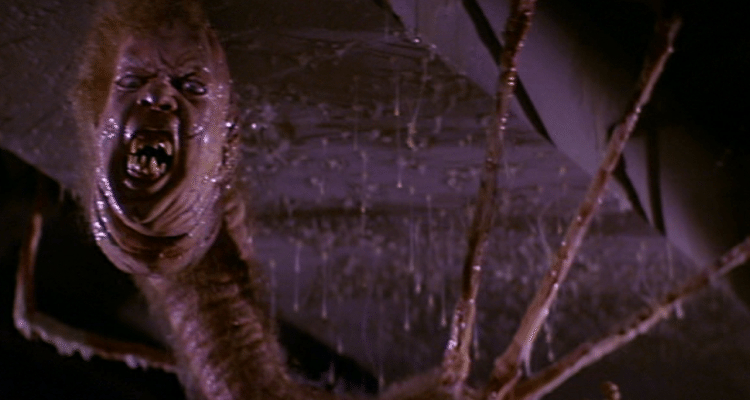 I asked if he could articulate what it was about it that he liked the most, and he said he liked how nobody is stupid, nobody makes frustrating decisions, and still nothing works out. And he said he was fascinated by the biology and purpose of the "thing" itself.

At the end of it all, I asked the big question:

What is The Thing about?

My kids adored The Thing. They loved it because it was "cool," of course, but also because it is elegantly constructed, witty, always smart, and holds up extraordinarily well. It speaks to our current situation while also allowing for a conversation about ultimate questions concerning the nature of existence. How do we define who we are? Is every part of our body "us"? If not, what is? The Thing is a masterpiece.