I got a graduation notice in the mail the other day from the daughter of close friends. I looked at it for a long time. The young woman finishing high school in this, the strangest of years, had, a couple of years ago, tried to kill herself and wound up getting institutionalized for a brief period. It was during this time that her mother reached out to me--knowing my history of mental illness--and asked if I could maybe write her daughter a letter. Nothing specific, just, you know...maybe I could. So I did. And a few weeks later, my friend said that her daughter was out of the hospital and had asked to meet me. We sat in a bright place, drinking coffee and talking for a couple of hours while her parents sat discreetly at another table.

Now this, and a note written at the bottom saying she wanted me to know she'd graduated and got into the college program she wanted, and to thank me for my kindness. I spend much of my life wondering if I have value--if I've left a positive wake. And then there are moments like this where I feel like there was a point to all of it after all.

My kids learned a couple of years ago that I had tried to kill myself in high school. I started the conversation with them around the same time I had my conversation with this young woman. They would find out eventually--and besides, mental illness shouldn't carry the stigma it does. I wanted them to know that I supported them if they felt they needed therapy; that if there's a hereditary element to it, the signs they should be vigilant to; that their father was flawed and hurting, but here and fighting.

A couple of films I clung to like a life preserver at the edge of a whirlpool are part of that story of survival in the summer of 1989. One was Steve De Jarnatt's Miracle Mile; the other was Kathryn Bigelow's Near Dark. Both are melancholy, eldritch romances (scored by Tangerine Dream, as it happens), and both held an apocalyptic storyline to which I found myself sutured. I sometimes think that in the throes of a depressive episode, an apocalyptic storyline is indistinguishable from a romantic one. I couldn't have hyped Near Dark any more than I did.

The kids, for their part, listened uncomfortably. My daughter asked me what it was about movies that I think prevented me from making a second attempt. I said that maybe finding other voices that mirrored mine alleviated my loneliness for long enough to get through to the next plateau. My son asked me if I thought I'd try to kill myself again. I said that I wouldn't do that to them, but that terminal thoughts were never far from my mind. We talked about therapy, medication, diet. I reassured them as well as I could, and all the time, depression sat right there, insinuating itself in my ear. It's what it does.

Near Dark is Bigelow's second feature following her directorial debut, The Loveless, the two films separated by six years.

Co-written by Eric Red, the author of a few of my favourites like The Hitcher and Body Parts (the latter of which he directed), Near Dark is about a simple kid, Caleb (Adrian Pasdar), who puts the moves on sweet Mae (Jenny Wright) one endless summer night, only to discover that Mae is part of a nomadic band of vampires travelling across the country in a blacked-out RV. They're a who's who of fabulous supporting actors: Bill Paxton, Lance Henrikson, Jenette Goldstein--a group the kids recognized as shared from Aliens. I told them Bigelow was married to James Cameron at that time. Actually, I was wrong: they didn't get married until almost two years after Near Dark came out.

What is Near Dark? Horror film? Road movie? Noir? Romance?

I told them about the stigma attached to horror films as something like the red-headed stepchild of "legitimate" cinema. I asked them why they thought that was, and they had a hard time coming up with an answer. "Is it because they seem less hard to make?" my daughter wondered. I said, "I don't know, does it seem easy to make something like Near Dark?" "Maybe it's because people are ashamed to admit they like something that appeals to the part of them that likes blood and violence," my son offered. I agreed, to a degree, but said that war films--especially Holocaust pictures or slave narratives--are trendy amongst the middlebrow, indeed. My daughter finally landed on an answer we all liked: "Maybe genre is just sort of arbitrary and labels are used to dismiss stuff that's too hard to deal with." Yeah, baby. I think that's probably dead on the mark.

What is it about horror movies that make people feel personally indicted?

The topic of drug addiction was big in 1987; so was AIDS. Neither has gone away, but for a time they were the flashpoint of broad cultural indicators. Near Dark is a handy metaphor for not only drugs and sexually-transmitted blood contagions, but also the fear of urban creep and its attendant criminality into the suburbs. I remember this period as a time when I started getting interested in serial killers, too. Hanging over all of it was the certainty that we were all about to be obliterated in a nuclear cloud. Reagan was gunning for the end of days. The End hung low and heavy over all of us. 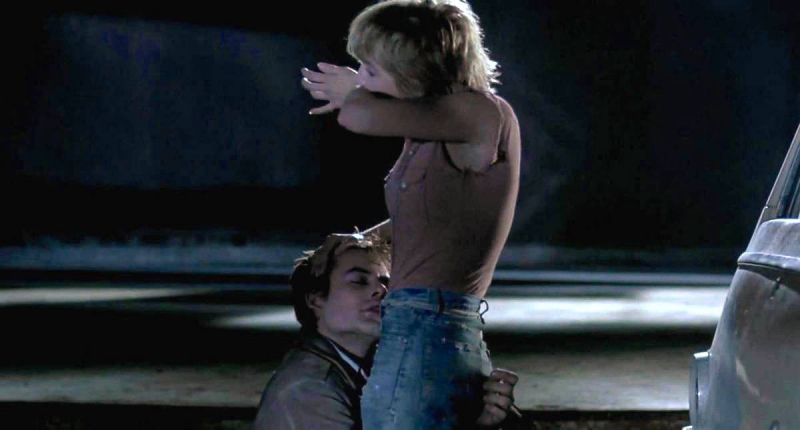 As I was talking about the '80s, the kids reassured that they were feeling the same things: beset by the same demons wearing now the faces of global warming, pandemic, and Donald Trump's white supremacy.

Caleb is bitten, but to become fully vampire, he must kill and drink the blood of a human. To stay alive until he does so, he drinks Mae's blood. He leaves before he knows the rules and tries to get home. In a bus station, short by a few bucks and starting to feel hungry in a way that makes him sick, he's interrogated roughly by a plain-clothes cop.

He doesn't make it far and runs back to Mae. In an iconic scene for those in the know, he drinks from Mae's wrist in an oil field with a derrick pumping away in the background.

The vampire band suffers Caleb's company only grudgingly. Mae's "creator" Homer is a child vampire particularly bitter towards this rival for Caleb's attention. In a trope borrowed from Anne Rice, he is an ancient thing trapped in a child's body: an abomination. We had a good conversation about what it would be like for them to never age out of their bodies as they are now, even as their consciousness ages. I took this as an opportunity to talk about how the image of a child vampire is compelling because we always feel wiser than we are. I told them that the opposite becomes true at one point as we look on in horror at what our bodies have become when inside, we still feel like we're twenty-five.

Homer is played by Joshua John Miller, the playwright and actor Jason Miller's son. My daughter has seen The Exorcist, and I told her that Homer is Father Karras's son. 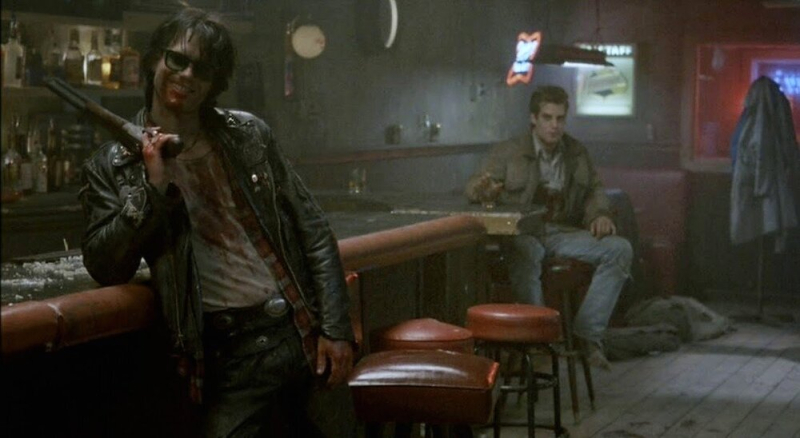 The brutal, hallmark diner sequence features a trio of songs the kids have heard their whole lives. I make mixes--even still in the age of Spotify--that we play on our prehistoric cars' CD decks with MP3 data discs packed with 100 selections I rotate out regularly. I'm a dinosaur. The songs are George Strait's "The Cowboy Rides Away," The Cramps' "Fever," and John Parr's "Naughty Naughty." I told them that in the before time, the way nerds found new music was sometimes through the careful parsing of illegible credits on jittery, frozen-screen, lo-res VHS cassettes and that I developed my musical taste such as it is through movies I loved.

How does the use of "drop needle" music enhance this sequence?

Opening this rabbit hole allowed us to talk about when filmmakers began to use original compositions for their films--and how great filmmakers like Scorsese and Tarantino still use drop-needle to great effect.

What are memorable drop needle moments in other films?

No one was pleased by the ending of the film. Both kids found it to be unrealistically optimistic and would have preferred Caleb dying or deciding to become a killer. They mourned the death of Severin (Bill Paxton) the most.

Why are villains more compelling?

In Paradise Lost, Satan is the most interesting, most engaging figure. William Blake called Milton a "poet of the Devil's part" and William Blake is a fucking genius. I suggested to the kids that Satan is compelling--that villains are empathetic--because they speak to our essential nature as brutal, small animals. It doesn't mean we don't aspire to be better. It does mean that being better is a fight.

In light of how it ends, the film is technically a romantic comedy. What is it really about?

The kids were stunned by Near Dark. Its propulsive darkness and heavy pall of pungent Romanticism casts its spell still, particularly over kids that are 14 and 16. 16 is the age I tried to kill myself. I worry about my son more than my daughter--though in truth, I worry about them both. When I think about Near Dark, I think mostly about the scene early on where Caleb sees Mae for the first time. It's a sultry summer night, and she's eating an ice-cream cone. He adjusts his hat and struts on over, and their first interaction is awkward and immediately familiar. It's as true a memory for me as any of my real memories. I didn't know how to ask my kids if it touched them with that ache of recognition. I hope it did.