With a strong foundation in classic Hitchcock and growing up surrounded by Hitchcock paraphernalia, my kids are, somewhat by osmosis, already fans. I didn't bother with a lot of background, in other words, before The Birds. What I did say was that Vertigo was Hitchcock confessing his most secret self, only to have it popularly rejected.

How does it make you feel when you say something important to you, that's hard for you to say, only to have the person you're telling it to minimize or dismiss it?

The answer is obvious, but I wanted to encourage empathy for the listener who may not always know they're listening to the secret-sharer at that moment--or that the confession triggers a reflux cycle of personal disappointments that may for a while drown out the words being given to them. I think both of those things are part of the explanation for Vertigo's contemporary, if relative, failure.

After Vertigo, Hitchcock made North by Northwest, which is seldom (correctly) identified as a bitter rebuke of a gaffed audience easily fed by a greatest-hits compendium of what they think they want. The film is something like the Avengers: Endgame of its day and was similarly popular. Between its success and healthy revenue streams gained from Hitch's freshly-minted role as a marketable brand (thanks largely to his television show), he found himself able to make whatever the fuck he wanted. And so he made Psycho and then, three years later, The Birds. 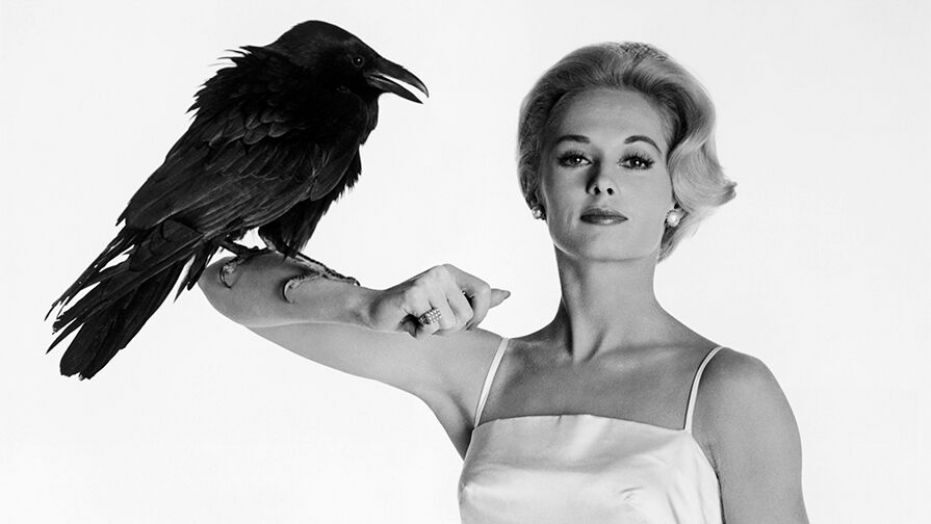 I told them to pay particular attention to when Melanie is attacked in the film.

Often described as inscrutable, The Birds, I argued, is, in fact, incredibly purposeful and even expository. Melanie begins as a disruptor of the male gaze: she intercepts and returns it. She plays a trick on Rod Taylor's dull-as-dishwater Mitch and, when found out, rather than be humiliated, plans a prank to get her revenge. But here's the rub, Melanie thinks better of it and makes the lovebirds a gift to Mitch's little sister instead.

This bow to domesticity is what causes the birds to attack.

What does "bird" refer to in colloquial British slang?

Hitchcock has a thing about women, duh. The kids were delighted to make the connection that the whole film is about the fear of women. More, the fear of whatever is mysterious about women to men and the ways that men mythologize it. My daughter asked, rhetorically, if this is why men marvel over how "crazy" women are when men are intimidated, humiliated, spurned by them. All of the language around diminishing women as "shrill" or "opinionated" or, most of all, "difficult" finds its root in the basic misogyny of branding something as "other" and, therefore, something beyond rational understanding. The same criticisms, I said, are levied onto The Birds.

I asked them to pay attention to the scene in the diner after the birds begin to attack in full. One terrified patron accuses Melanie of bringing the plague.

If we grant that it's Melanie's fault--how does she exacerbate, rather than ameliorate, the situation?

The kids wanted to talk about Mitch's odd relationship with his mother and sister. The ages don't seem right. How much older is Jessica Tandy than Rod Taylor? How does the math work for him to have Veronica Cartwright as a sister? What's the story behind a woman having kids twenty years apart? Thirty? Was she a teenager? Hitchcock has played with ages like this before, most notably in North by Northwest, where the actress portraying Cary Grant's mother (Jessie Royce Landis) was only eight years older than Grant. But here, Tandy was a very reasonable 21 years Taylor's senior. Cartwright, however, is 19 years Taylor's junior. Is it inconceivable for Tandy to have a child at 40? Nope. One of them, though, was clearly either an accident or the product of a second marriage.

It's a deep rabbit-hole to chase, and I'm not convinced it has a fruitful reward for the journey--but it did lead to a conversation revolving around how the family dynamic plays out with the introduction of Melanie.

"She's like the mom now," my son said. And it's true. The resolution of the film is a new domestic arrangement: the parents, the child, and the mother-in-law.

I asked the kids what they thought the Suzanne Pleshette character, Annie the schoolteacher, represented in the film in both her tension against and alliance with Melanie. I made sure to guide them to the realization that in terms of colouring, they're essentially photo-negatives of each other.

I told them of Tippi's trials on set. Of having to be hospitalized for a nervous breakdown caused by exhaustion and by the attic sequence in which Hitch tied birds to her after promising to use only puppets on the close-ups. In their terror, they pecked at the actress. I told them that Pleshette pulled her aside one day and said, "I'm sorry, it's not always like this," and I told them of Hitch's myriad abuses of her here and while shooting Marnie. The opening is a recreation of the commercial where Hitch saw her for the first time, picked up the phone to Edith Head, and instructed her to start making a wardrobe for her as his next project. 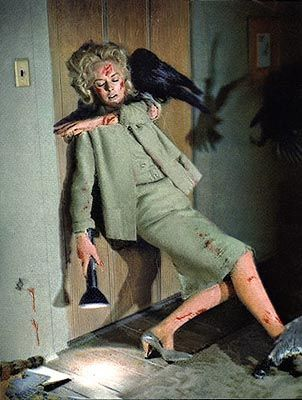 I asked what they thought of/noticed about Bernard Herrmann's experimental score. They thought for a moment and wondered if there was any music in it at all. I said "no," but that there were a lot of bird calls. I waited a moment, then told them that Herrmann invented a machine that would make noises that sounded like birds but were not birds.

"Like how the movie is not really about birds," they said.

"That's true," I said, "there's a lovely symmetry about that, isn't there?"

If the ending of the film bothers you, why does it bother you?

My son said the ending might have bothered him if he hadn't watched the film as a metaphor.

"I don't think the plot of it tells the story of it."

Some would say The Birds is avant-garde in its execution. But it serves as a handy key to Hitchcock's career obsessions, and you can find hints leading to this moment throughout the long timeline of his career. In its way, it's a more important Rosetta Stone than Psycho or even Vertigo in understanding a life's wrestling with the disturbance of women revealing the fragility of men.

Does this movie hate women?

They observed that the saving of the lovebirds in the end suggests something much thornier than pure hate or love. Like what? Like maybe we have to live with one another, and walk quietly, and respect what each of us loses in the pursuit of a relationship--the compromises we make with bestial nature to create a world together. And forever, outside the periphery, lurk the beasts of our collective unconscious. Back in your gilded cage, Melanie Daniels. 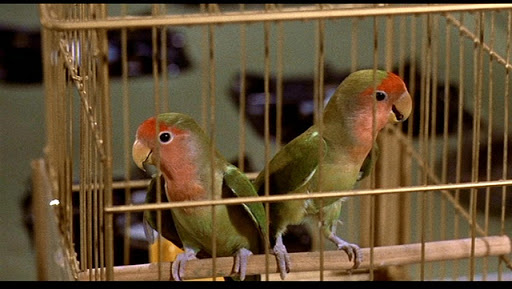