William Wyler is a titan.

My daughter loves the Brontë novel and asked who starred in Wyler's. (We're both avowed fans of Andrea Arnold's version.) I said, "Merle Oberon and Laurence Olivier." "Does that one end at the halfway point?" "It does." It's good, though. Before the Arnold version, I'd say it was the best one in an admittedly weak field.

My son wanted to know why Wyler is not as well known as folks like Alfred Hitchcock or Howard Hawks if he was such an important director, and it was here I had to confess to the gaps in his education for which I'm responsible. I hadn't spent much time "doing" Wyler flicks with the kids because I was more interested in keeping their attention when they were young. This is not to say that I find Wyler to be boring, but rather more boring, at least, than, say, John Ford, Fritz Lang, Charlie Chaplin, or Buster Keaton. I told them about Andrew Sarris and how his analysis of the French critics of the Cahiers du Cinéma magazine led him to an "auteur" theory of film, which suggests the "author" of a film is its director.

"But so many people work on a film!"

It's true. I used a sports analogy: no matter the talent on a team, the team tends to take on the personality of the head coach. That is, if the head coach has a vision. 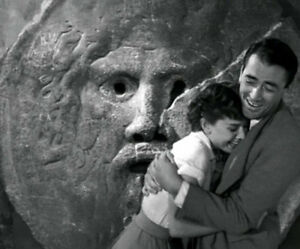 What are examples of other collaborative enterprises that take on the personality of their leaders?

My daughter suggested Wal-Mart and how its pricing structures and advertisements reflect the general venality of its billionaire ownership. I thought that was an interesting take.

To complete a thread, I told them that Andrew Sarris devised a ranking of directors into specific categories and that William Wyler failed to make the "pantheon" of fourteen great directors making films in the United States. He saw Wyler as something that Francois Truffaut referred to in his 1954 essay "A Certain Tendency in French Cinema," that is, sort of stolid and "critic-proof."

The conversation here veered perhaps inevitably into questions of race and gatekeeping. Certain films glorify the status quo and romanticize the banality of the ruling class. It's what's led the Academy of Motion Picture Arts & Sciences to commit to sweeping changes in its membership in a quest for more diverse representation. The kids made it through about thirty minutes of Driving Miss Daisy--a film I ran for them after our screening of Do the Right Thing. After tapping out, I asked them why they thought this was the popularly-lauded film the same year as Spike's timeless joint. The question is sort of the answer.

My defense of Wyler is based largely on The Best Years of Our Lives, which is, you know, fucking great, as well as Roman Holiday, which is the kind of movie you wouldn't think a guy like Wyler had in him. That is, it's light, frothy, beautifully bittersweet. When people ask me what my favourite romantic comedy is (they never do), I always say Roman Holiday.

Roman Holiday is the moment of Audrey Hepburn.

I grew up aware of Hepburn in an odd way. My mom was a bit of a Hollywood buff--or, at least, she read a lot of Hollywood biographies. I still have her old paperback of Lauren Bacall's memoir. This is strange because I don't recall ever having a single conversation with her about movies. Ever. To this day, as it happens. But it was my dad who told me that Audrey Hepburn had had a terrible time in WWII and that was probably why she was so skinny. The thought of Audrey in a concentration camp (she wasn't) stuck with me my whole childhood. In truth, she helped the Dutch Resistance in the Netherlands, where she lived with her uncle.

What is true is that in the wake of Operation Market Garden after D-Day in Arnhem, the Germans squeezed off vital supply routes into the town, leading Hepburn's family to grind tulip bulbs into flour to make bread. She developed anemia and respiratory issues--all of them symptomatic of malnutrition. My dad wasn't wrong, he just wasn't specific enough for me to paint the proper picture.

Hepburn scored a hit on stage with Gigi, enjoyed a series of minor film roles, including landing a single line in The Lavender Hill Mob, and then came Roman Holiday.

It was a role intended for Elizabeth Taylor. During the shooting of it, Gregory Peck said to Wyler that it would maybe be a good idea to give Hepburn equal billing on the picture. "You've got to change that because she'll be a big star, and I'll look like a big jerk." Whatever Peck was, he wasn't stupid.

Both my son and my daughter, almost in unison, said "I'll be back" in bad Arnold impersonations in memory of that moment in The Terminator in which this meathead became one of the biggest stars in the universe. Odd that Schwarzenegger has recently caught on with the Zoomers through a series of short videos where he shares dinner with his miniature horse and donkey.

The moment for Audrey is when her Princess Ann gets a haircut. The chair spins around and...there she is. I told the kids that Jennifer Aniston's haircut became a thing, too, when "Friends" was at the peak of its popularity. My kids hate "Friends" because they're smart. I also told them that sunglasses became a big thing in Hong Kong when Chow Yun-Fat wore them in A Better Tomorrow; blue jeans when Brando wore them in The Wild One; and red canvas jackets when James Dean wore one in Rebel Without a Cause. 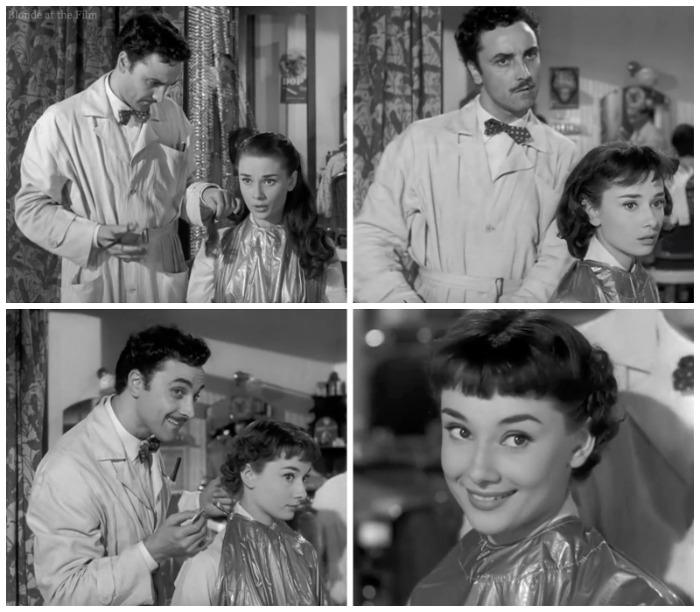 I asked them to consider their own collections of print T-shirts and what it is they're "speaking" when they wear emblems. I encouraged them to read Roland Barthes, though I didn't as of yet make it a requirement.

Is Roman Holiday a comedy?

What kind of ending does Roman Holiday have?

The kids had a good time with this one--it's a hard movie to dislike. They both liked the Eddie Albert sidekick character.

Dalton Trumbo is a co-writer of this film but could not be credited originally because he was on the Hollywood Blacklist. I gave the kids a very quick overview of HUAC; how a group of conservatives, led by Sen. Joseph McCarthy, began questioning artists about their connection to Communist/subversive activities. This was back in the good ol' days, when our government did not like Russia.

The film is a fantasy structured on a familiar fairy-tale; a Prince-and-the-Pauper trope, if you will, where someone immensely powerful masquerades as someone very ordinary indeed. 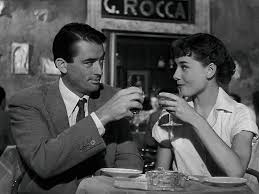 What is it about this fantasy that is "romantic"?

What's this movie about?

I led this a little bit by saying that Roman Holiday is a quintessential "Hollywood" film. It's glossy, handsome, packed with stars...

"But Hepburn wasn't a star before this."

Even so. What makes a classic, then? Design? Circumstance? And if it's circumstance, would the film be what it is if it were directed by Hitchcock instead? Lang?

They were both surprised by its bittersweetness and thought Hepburn was not a good actress, but was instead a very good icon. I thought that was pretty spot-on.