If it seems like we talk about religion a lot as a family, well, I guess we do. Not organized religion, per se, but belief, spirituality, and most of all morality. My kids need to be curious. Curiosity is a requirement. And if you're curious enough and ask "why" enough, you eventually get to the ultimate questions. 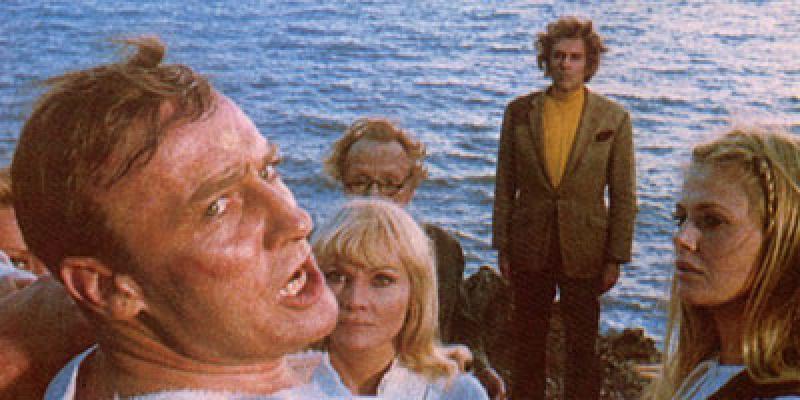 Robin Hardy's The Wicker Man would play beautifully in a double feature with Matthew Robbins's Dragonslayer, as both are movies about the intersection of fundamentalist Christianity with the pagan religions it's absorbed, supplanted, and wiped imperfectly off the face of the world. I introduced the film as a missionary picture, a tale of a pilgrim infiltrating untrammelled territory to spread the word of the Lord.

The kids landed on an idea of the purpose of missions being the gratification of the missionary. I wondered if there was ever a good result of colonization and they, being of the generation they are, couldn't think of one thing. Our conversation went far afield to topics like the British in Hong Kong, the Opium Wars, the conquest of the New World, and the genocide, disease, and misery that seems to follow every major divinely-inspired Crusade.

I asked what the nature of that gratification was if, indeed, the only purpose of the mission is the gratification of the missionary. My son said that if he succeeds, then he succeeds--and if he fails, he's a martyr who has had his worldview confirmed. I thought that was a pretty good diagnosis of modern Evangelicals.

In The Wicker Man, good Sergeant Howie (Edward Woodward) flies to remote Summerisle off the coast of Scotland in search of a missing girl. He's received an anonymous tip, you see, and he's stirred by the righteous cause. Once there, he's horrified to find a community invested in the worship of fertility gods and symbols--old gods. The rabbit is a key fertility symbol for obvious reasons and appears throughout the film.

Nothing. It's true. What I love about The Wicker Man is how all of the things Howie is horrified by on Summerisle are things that Christians have...colonized.

Almost immediately, the innkeeper's daughter (Britt Ekland) tries to seduce Howie by dancing seductively on the other side of a wall. Later, Howie surprises the town's sexy librarian (Ingrid Pitt) as she bathes and she offers her nakedness to him as well. Howie resisting two of the most ravishing beauties in the history of exploitation cinema is a testament to his righteousness.

We covered more basic questions of symbolic language as well by engaging the theory of the archetype. That is to say, an image that conveys the same meaning across cultures and individuals. I asked the kids to identify the archetypes in the film and they were pleased to discover that this exercise is the same one in which the children of Summerisle Elementary were asked to engage.

In the end, following a parade in which Howie has disguised himself as the "fool," he's burned as a sacrifice to the Harvest in a gigantic effigy of a man made out of, yes, wicker. To the end, he promises his tormentors damnation while proclaiming that his reward is eternal. It's an interesting corollary to how organized religion, for time eternal, has caused suffering and fear while promising an exclusive, posthumous prize.

I read them some poetry. They don't love it when I do that but they're respectful. I read them "The Chimney Sweeper" by William Blake, from his Songs of Innocence and Experience:

When my mother died I was very young,
And my father sold me while yet my tongue
Could scarcely cry " 'weep! 'weep! 'weep! 'weep!"
So your chimneys I sweep & in soot I sleep.
There's little Tom Dacre, who cried when his head
That curled like a lamb's back, was shaved, so I said,
"Hush, Tom! never mind it, for when your head's bare,
You know that the soot cannot spoil your white hair."
And so he was quiet, & that very night,
As Tom was a-sleeping he had such a sight!
That thousands of sweepers, Dick, Joe, Ned, & Jack,
Were all of them locked up in coffins of black;
And by came an Angel who had a bright key,
And he opened the coffins & set them all free;
Then down a green plain, leaping, laughing they run,
And wash in a river and shine in the Sun.
Then naked & white, all their bags left behind,
They rise upon clouds, and sport in the wind.
And the Angel told Tom, if he'd be a good boy,
He'd have God for his father & never want joy.
And so Tom awoke; and we rose in the dark
And got with our bags & our brushes to work.
Though the morning was cold, Tom was happy & warm;
So if all do their duty, they need not fear harm.

I told the kids The Wicker Man was my favourite musical--an assertion they challenged until an entire inn's worth of guests burst into jubilant song. Each time I revisit this movie, I love it more. My wife, however, can't watch the end because the lamentations of poor Howie are too much for her to bear. "He's a good man," she says, "if a bit of a scold." My wife is a lot nicer than me.

Unpacking symbols and archetypes is, of course, a foundational skill required in both criticism and psychology. We're saving the conversation about that confluence for another film.

Next time? The ebullient, bittersweet Roman Holiday and the moment of Audrey Hepburn.