Life During Wartime #17: SHAUN OF THE DEAD (Patreon exclusive)

Life During Wartime #17: SHAUN OF THE DEAD (Patreon exclusive)

Zombie movies are complicated, and that complication is itself complicated. Is there something intrinsically metaphorical about cannibalism? Catholics would say so--or, rather, they wouldn't. The ingesting of the Host, after all, isn't a metaphor. For the rest of us, though, the ingestion of another carries with it an innate taboo: the essence of society is threatened when one member of a group is consuming another. There's a sense of "dirtiness" that translates, I think, into zombie mythology as a form of contagion that can be passed through a bite after a period of incubation. That period varies depending on the franchise--and sometimes it varies within a franchise, depending on the requirements of the plot--but the delay in which victims display symptoms of infection allows for the zombie-movie convention of someone hiding their illness. 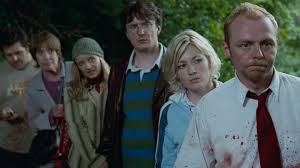 Attending the cannibalism and contagion, then, is a sense of social shame. It's embarrassing to be a zombie. Zombies are rude and dishevelled, transgressors of all manner of social more and unwelcome reminders of our essential, animal nature. George Romero's Night of the Living Dead (1968) is the single most important Civil Rights movie because embedded in it is the irreducible social metaphor of a white woman and a black man barricading themselves in a rural area as an army of slow, white imbeciles descend upon them. Read one way, it's a harsh critique of the rise of televangelism throughout the '60s. Not for nothing, the film's grace note is a well-armed militia of hillbillies finishing off what the zombies couldn't.

Christianity is an interesting mythology, because it's arrayed around the ingestion of flesh, the imbibing of blood, and the resurrection of not merely a saviour, but all of the religion's adherents on the best day of their lives. (Namely, the end of the world.)

I introduced Edgar Wright's brilliant Shaun of the Dead to the kids as a film that's not just a wonderful satire of zombie films, but also a wonderful example of one as well. Walking that line between taking the piss out of something without dishonouring it--including not alienating the fans of said thing--is an art. Wright and partners-in-crime Simon Pegg and Nick Frost are masters of it. I said, in essence, that the movie understands every zombie-movie trope and that it will be their job at the end of all of it to tell me what those tropes are.

As a baseline, both kids have watched Night of the Living Dead, and my daughter has seen 28 Days Later... along with its far superior sequel, 28 Weeks Later. She said of the latter that she was "shook" by its nihilism, its essential pessimism about humans pushed to their terminal limits. She liked that the "happy ending" for the young heroes doomed everyone else. There's a lot of "there" there.

I collect records, posters, and books about movies. I also collect Hot Wheels Batmobiles. I just do that. The kids were delighted by a scene where Shaun and Ed throw Shaun's record collection at the zombies. It's not a very effective way to fend off the walking dead.

Why do you think they were throwing records at the zombies?

Here, as always, I pushed the kids to avoid the straightforward, narrative answer. The easiest thing in the world is to tell me what literally happens. You watched it, you can regurgitate to me what you saw. If you can't, that's potentially an interesting comment about the visuals and structure of the film. If it's intentionally oblique, that's one conversation; if it's unintentionally oblique, that's another conversation that's almost as fascinating. In any case, their answers were some variation of "because it makes you sad and anxious."

Why is the destruction of someone's record collection anxiety-inducing for the audience?

They were able to articulate the idea of how Shaun of the Dead is, even here, making fun of collectors and other fanatics without being a dick about it. It's funny that Shaun needs to look at everything before they toss it. My son offered the comment that Shaun's valuation of his records made him believe they would be a more effective weapon against the zombies. That's...kind of brilliant.

In a time of quarantine, where the disruption of a lifetime's routine has made everything seem new and strange, I asked them what they've seen in the world now that they would've taken for granted, or overlooked, in the past. My daughter said she never realized how often we had to load and empty the dishwasher--and how often we chose to get take-out or go out to eat in the past. Indeed, it was our greatest pre-pandemic vice. We could never afford it, but it was our version of everyone sitting down at the table to have dinner as a family.

Shaun of the Dead surprises constantly, not the least for its delicate handling of friendships, love, and filial relationships. Shaun's relationship with his mum and stepdad is exceedingly nuanced, in particular. There are even a few moments devoted to a loaded back-and-forth between Shaun's girlfriend Liz and her platonic friend David in the middle of all that movement.

About midway through the film, Shaun and his party encounter an identical party composed of the same character types.

What is the basis of the joke of the two parties mirroring one another?

There's a certain reflexivity to Shaun of the Dead. Wright constantly reminds us that his beast is self-aware and quintessentially post-modern. I explained that concept to my kids as simply as I could: the theory that a thing is dependent entirely on our knowledge of other things we have experienced. For as good as Shaun of the Dead is in a vacuum, it's better the more familiar you are with films in the same genre that came before. My son called out the line "They're coming to get you, Barbara!" and I glowed with the pride of a job well done.

Zombies represent many things; what do they represent in Shaun of the Dead?

We talked a long time about this one, covering things as far-flung as Evangelicals and MAGAts all the way to, eventually, people living inauthentically and their enervating effect (and affect). The dangers here are a surrender to routine, my daughter said. And yet the film ends with the assumption of a new routine after zombies have become things to exploit for entertainment--which is, after all, how we do.

What are "essential" workers?

I asked this when we noted the zombies being used at the end to collect supermarket carts. Is the message of Shaun of the Dead, I wondered aloud, that this system requires us to be mindless automatons in the service of a soulless system? It's not a conversation they were ready to have and, fuck, I'm not ready, either.

Finally, what's this movie about?

Love, friendship, the ability to express love and friendship... I shared with my kids that my life changed when I started telling my male friends I loved them. I don't tell my female friends I love them because that's still a little culturally dicey and uncomfortable, though I've gotten comfortable signing off with my male buddies with "love you." I seldom get it back, and that's fine, but my heart does soar when I hear it in return. Men express their love for each other a million different ways, but they seldom say it plainly. I've decided to say it plainly, and it's made all the difference in my comfort with my masculinity.

At the end of this zombie movie, we landed on the idea that we should tell the people we love that we love them. It was a good screening. Also: if you sneeze, especially on a bus, sneeze into your elbow, you disgusting vector.

Next time, we hit Robin Hardy's deeply disquieting The Wicker Man. It's my favourite musical.