Life During Wartime #15: DO THE RIGHT THING (Patreon exclusive)

Life During Wartime #15: DO THE RIGHT THING (Patreon exclusive)

I introduced Spike Lee's Do the Right Thing to my kids as the defining film of arguably the most important American director of the past forty years, Spike Lee. I've had a strange relationship with Lee's films, one I compared to my kids to my relationship with Neil Young. I didn't always understand Neil Young's music as a kid or, even, in truth as a younger man who should've known better--but in the last twenty years or so, his genius has become inescapable for me. In fact, it's so obvious now that I'm having trouble understanding what it was I didn't see before. Telling my kids that their tastes will mature is one of those things old people say that young people find irritating, but it doesn't make it any less true. It's my hope they'll hear this maxim differently couched in a tale of personal growth.

When Lee's 25th Hour was initially released, I was too young and naive to see it for the masterpiece it was. I know I'm often wrong, but I'm still startled when I'm so entirely wrong. I didn't like Tom Waits the first time I heard him, either. 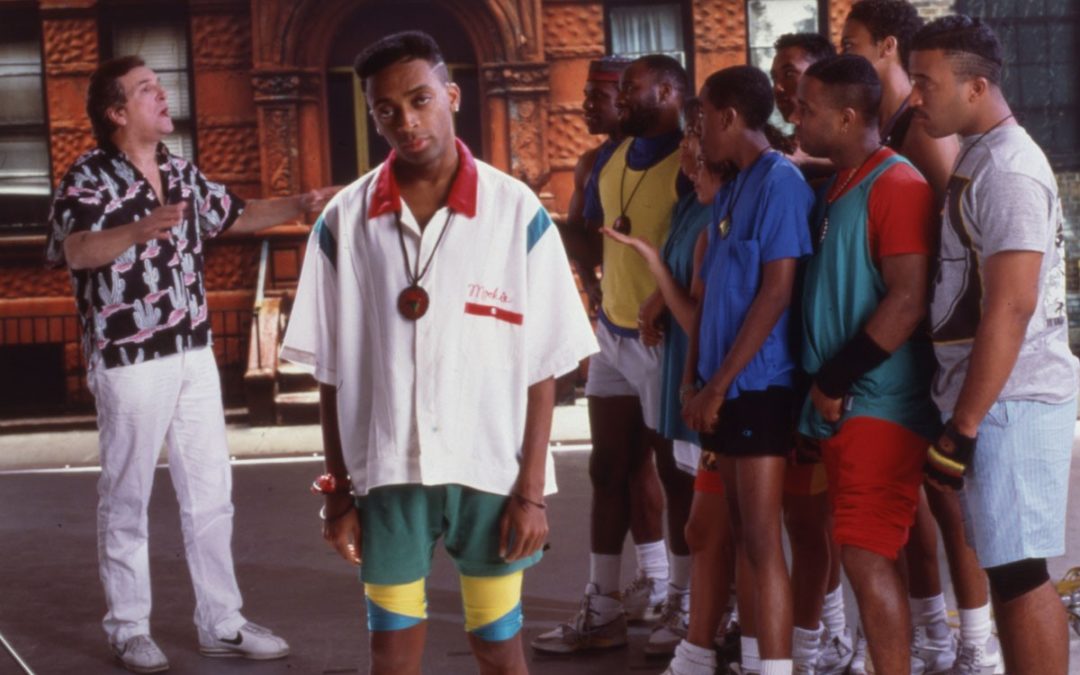 I first saw Do the Right Thing the year it opened, when I was sixteen--the same age my daughter is now. I fashioned myself, as she does not, as something of a film sophisticate based on my religious reading of Roger Ebert's Movie Yearbooks and slavish renting of VHS tapes from the local video store. I realize in retrospect that liking movies had already become by that time proof of my viability in this culture: my armour, my disguise, my entire identity. When I decry toxic fandoms, I speak as an ex-cultist only recently deprogrammed. The rave reviews of Do the Right Thing heralded its importance, and my appreciation of it was born mostly of the expectation that I appreciate it. In truth, I found it mystifying and frightening.

The key sequence of the film--at least the first one I think of when the subject comes up--is a series of racial invectives shouted by the leading players directly at the camera. As a Chinese-American in an all-white area doing his best to pass, it made me feel uncomfortably exposed. There's a line in Lee's BlacKkKlansman where the Adam Driver character declares how going undercover as a white supremacist has made him acutely conscious of his Jewish heritage that nails the hell of being confronted, constantly, by your difference. Do the Right Thing is an essay on difference.

I wonder if my long road to Spike Lee is a result of my reluctance to confront my difference here in the place I was born. No matter how much I wish to "pass," I'm utterly incapable of passing.

I confessed to my kids this desire to completely assimilate into this culture--which is, after all, the only culture I have ever known--and my delayed understanding that assimilation means vanishing, and that there is more power in distinction. Do the Right Thing can be read as a story about distinction. On the one side, you have Italian pizzeria owner Sal (Danny Aiello), who only hangs portraits of Italian heroes on the walls of his restaurant despite the protests of his predominantly black clientele. On the other, you have his delivery boy, Mookie (Spike Lee himself), who finds himself torn in his allegiances between Sal and his community as well as work and his girlfriend, Tina (Rosie Perez).

We had an interesting conversation centred on the film concerning our family's racial identity. My wife is white--mostly British and a little German, but American for generations. I'm a Chinese thoroughbred. Our kids are a mélange of disparate, often historically antagonistic cultures, existing in a generation that seems mostly unconcerned with this product of our miscegenation. Their peers are Asian kids adopted by white parents, Native American kids in the same circumstance, East Indians, and other Amer-Asians with Asian mothers and white fathers. The main surprise of their friends when first interrogating my kids' biological backgrounds is that I'm the Chinese one and my wife is the white one.

My daughter is proudly, defiantly Chinese. It's funny, because she's a vegetarian who will only make exceptions when presented with traditional Chinese dishes prepared in the traditional way. She said this to her white grandmother once, and my mother-in-law, who is sharp as a tack, said that Kentucky Fried Chicken was also her heritage. My daughter took it well, but you could tell that it stung. I said I found it interesting that they were more comfortable identifying as Asian than as white when, for me, who had no choice, it was the opposite.

Do the Right Thing itself was taken with none of the discomfort I experienced as a kid; something about their upbringing and their environment seems to have armed my kids with a sense of indomitable identity. They know who they are and they like it. More, they've never been made to feel ashamed of it. They viewed Do the Right Thing as something not surprising so much as...what's the word? Is it "obvious"? I don't say that to demean the value of the piece. Just the opposite: Do the Right Thing works for them as validation. The revelation for me is that it probably worked that way for African-Americans from day one--and that my inability to like it as much as I was supposed to has everything to do with my own shame, indeed hatred, of who I inescapably was.

Why does Lee open the film with Public Enemy's "Fight the Power" and Rosie Perez dancing in isolation to it?

I provided them with the lyrics to the song:

The song talks about cultural appropriation through its sampling and pomo references, in a sense re-appropriating cultural milestones for the purposes of protest. It is Basquiat's art transmogrified into rhythm and outrage using the oppressor's language.

Ultimately, Do the Right Thing was a mixed bag for the kids. They weren't surprised by it so much as validated. I guess there was a part of me that wanted them to experience it as foreign so that I might defend it as familiar--maybe intimately so. I'm proud, I suppose, that they're grounded in a way I never was, though I confess it increases my loneliness a little that they don't share my alienation. I realize that's a selfish, monstrous thing to say.

Such is the complexity of Spike Lee's pictures--and such, too, is their essential American-ness. We are a country forever at war with ourselves. We are without a meaningful history, a brutal people eternally engaged in the murder of a swiftly-tilting gallery of different peoples. We are slavers, conquerers, genocidal morons, the logical issue of religious fanatics unwanted by every civilized nation that existed in the seventeenth century. The sins of our fathers haunt us, and we live on a graveyard of those sins. Lee's films are excavations of these sites of our atrocities--and the consistency of his fury is like a cleansing fire on our national character. Who but a quintessential American could make a movie this critical of the United States? No one looks good at the end of Do the Right Thing. No one. I think what's lost in so many studies of Lee is his introspection.