My kids have a great deal of experience with the Coen Brothers. Blood Simple, Raising Arizona, Miller's Crossing, Barton Fink, The Hudsucker Proxy, The Big Lebowski, O Brother, Where Art Thou?, The Man Who Wasn't There, True Grit, Hail, Caesar!--all seen by both children. My daughter, the more adventurous moviegoer of the two, has also seen The Ballad of Buster Scruggs and No Country for Old Men, which she declared to be the most frightening movie she'd ever watched. This is coming from a veteran of The Exorcist, Poltergeist, Jaws (twice), and The Changeling. Neil Marshall's The Descent startled her more, she tells me, but No Country for Old Men shook her existentially. I dug a bit as to why she thought that was, and she indicated the capriciousness of the evil it depicts, and the inexorability of that capriciousness, really disturbed her sense of the world. "I never thought of the world as so dedicated to being meaningless and malicious," she said, and I don't know that it could be put better. She's also seen Inside Llewyn Davis and revealed that it reminded her of me. I wasn't ready to dig deeper into that one. Someday, perhaps, when I'm feeling stronger.

For all their exposure to the Coens, though, we had consciously skipped Fargo, because, for whatever reason, Fargo had always seemed too cruel to show them. The Brothers are notoriously misanthropic and brutal towards their characters. Of all the flags they carry, I think they carry Billy Wilder's the most prominently. Their movies, the Coens' and Wilder's, are assholes.

I introduced Fargo with the contrary perspective, however, asking them to focus on the warmth in a film set almost entirely in winter--of the landscape and, sure, of the soul.

William H. Macy's Jerry plots to have his wife kidnapped, essentially in order to steal a sum of money from his wealthy father-in-law, who despises him. Playing the kidnappers are Steve Buscemi and Peter Stormare, the latter of whom we would remember as Lucifer from Constantine. The kids are familiar with Buscemi from Reservoir Dogs. Of the things they came up with in regards to coldness, there's the setting, of course, but also the relationship between Jerry and his father-in-law, Wade (Harve Presnell), and then the icy interactions of the killers. 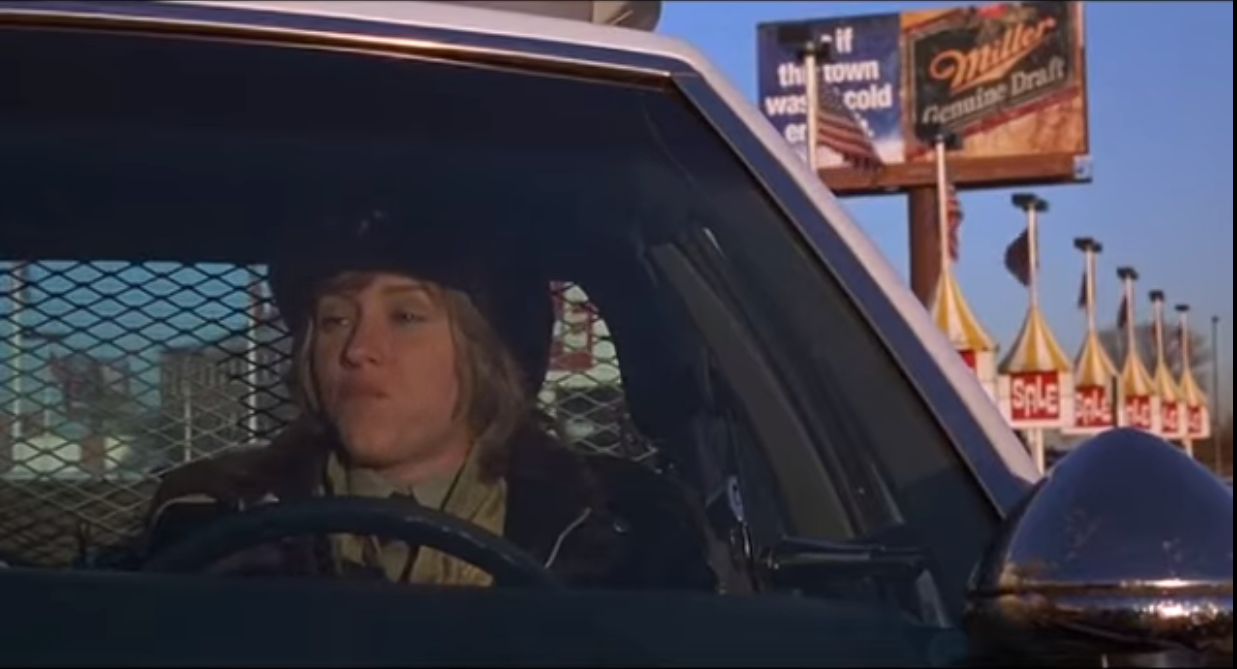 Having just discussed marriage with Pierre Etaix's Le Grand Amour, we're presented in Fargo with Brainerd police chief Marge Gunderson (Frances McDormand) and her husband Norm "sonuva" Gunderson (John Carroll Lynch). (Mia has seen Zodiac and was surprised when he appeared.) Both kids noted how Norm drags himself out of bed to cook Marge an egg for breakfast. Later in the film, Marge gets a fast-food egg sandwich and pauses for a second after her first bite to look off as if remembering something, and smiles.

This is Marge recalling Norm's love for her and hers for him, and it's an astonishing moment in terms of performance and writing, if indeed the Coens scripted it. The amount of emotional intelligence it takes to include this character beat--which, frankly, I didn't catch the first ten times I saw Fargo--is immense.

The obvious answer involves Jerry's attempts to cover up his money problems at work, but there are other questions worth asking that fold into this conversation nicely. Why is Shep Proudfoot (Steve Reevis) doing this for Jerry? Why are the kidnappers doing it? How would things have been different had Wade been more supportive of Jerry along the way?

The desperation question also inevitably leads us to the astounding "Mike Yanagita sequence," in which Marge's old high-school friend (Steve Park) makes a clumsy pass at her, has an emotional meltdown telling an incredible lie, and is revealed later to be going through a breakdown and living at home. For this peripheral character to exist, much less be played by a "model minority," is miraculous for all the discomfort of the scene itself.

With a teen boy and girl, we opened up the topic of constructed realities: how men, especially young ones but basically all men, attempt to construct realities about themselves.

We touched on the idea that Fargo is a noir in some ways, recalling our chats about Out of the Past and Constantine. The kids identified the detection element immediately but were stymied when trying to assign traditional noir roles to Marge and the rest. I offered that Fargo is interesting because its characters don't undergo much in the way of essential change, its mystery is never much in question, and if Jerry is the "hero," he's one without a moral centre. The world is bleak and driven by greed and base stupidity--yet here's Marge, who is a paragon of decency.

The opportunity the film provides to teach our kids about the relative unimportance of money is invaluable as we enter an era in our nation's history where we are forced to reckon with our system of extreme economic disparity. The kids are aware of my employment history, from owning my own corporation to freelancing to food-service manager, district manager, and VP of Operations. They know how I feel about corporations after all that time, and they know that money and power have done nothing to make me feel better or happier. I've told them repeatedly how money is the means, not the end. They're at a stage in their lives where the future is in front of them, and aspiration is a powerful drug; I hope they'll remember Marge's climactic monologue in the film and think hard about the things they'll be asked to do to achieve certain goals.

It's not worth it. Not for just a little bit of money. And here it is, another beautiful day.

Fargo was a huge critical success, and both McDormand and the Coens won Academy Awards, the latter for their screenplay.

I've gone a lot of places with this film. For a while, I thought Fargo was unnecessarily mean to its most vulnerable characters. I felt deeply for the wife and son; her death off-camera seemed dismissive to me in an aggressive way. (Ditto, the son's sort of disappearing from the narrative.) But I've come around to the idea that we are pushed towards seeing them in the same way Jerry and the kidnappers see them: as pawns in their stupid game. The worship of wealth and status then becomes what Fargo is about--and how that pursuit is by its nature inhuman. Subhuman, even.

My kids are sick of hearing it, but my gospel is that money is a progressively addictive drug. I've never seen anyone not be changed by money. It warps your perspective and distorts your morality. If it doesn't, you're an exceedingly rare case, and I'm still skeptical it hasn't. The need for money in our culture is intense: without a job, you literally have no value in late capitalism. What we want to give our kids is the sense that not only do they have intrinsic value, but others have intrinsic value as well. I used to scoff at folks who would answer "what do you do?" with "I like to hike" or "I'm a poet" instead of, "I'm the VP of Operations for a corporation run by rich dipshits who don't give one fuck about the people who they've exploited." I'm different now. Fargo is an amazing tool for that conversation.

Jerry has destroyed his life through a series of scams to obtain money. Not even "fuck you" money, just a stupid little bit of money. He wants respect from his father-in-law, his customers, and his boss--he's every bit the everyman, and kids especially need to take a good, hard look at that.