Jerry Lewis once declared that he learned the meaning of the word "genius" twice: the first time when he looked it up in the dictionary, the second when he met Pierre Étaix. As the story goes, neither spoke the other's language, so they expressed their mutual admiration by pantomiming scenes from each other's films. However accurate the recollection, it's a lovely anecdote, and Lewis and Étaix's friendship was forged quickly and well documented. Lewis even cast Étaix in his still-suppressed Holocaust film The Day the Clown Cried (1972). While introducing Étaix's Le Grand Amour, I realized the kids didn't know who Jerry Lewis was (something we'll remedy along this journey), a gap that's entirely my fault by way of omission both accidental and somewhat wilful. I appreciate Lewis, yet I'm not sure I like him very much. Small doses do me just fine, and I have trouble maintaining interest, much less hilarity, over the course of a feature. I know this is heresy; it's past time for me to revisit him.

I introduced Le Grand Amour by comparing Étaix to an artist with which they are recently familiar--Buster Keaton--and challenged the kids to regard Étaix's performance, and direction, through the lens of silent comedy.

What is the nature of "the gag" in this film? What are some of the set-ups and pay-offs?

I challenged them to consider, too, the sophistication of Étaix's gags in comparison to more standard set-up/pay-off mechanisms like the villagers swinging into the gongs in Joe Versus the Volcano. For instance, the early gag of Étaix trying to remember a detail in flashback, only to have the waiter in his flashback tell him to make up his mind already. We focused our attention on the layered (and legendary) dream sequence in which Étaix's character rides his bed with his young secretary through a world in which every other dreamer is also riding their respective beds. 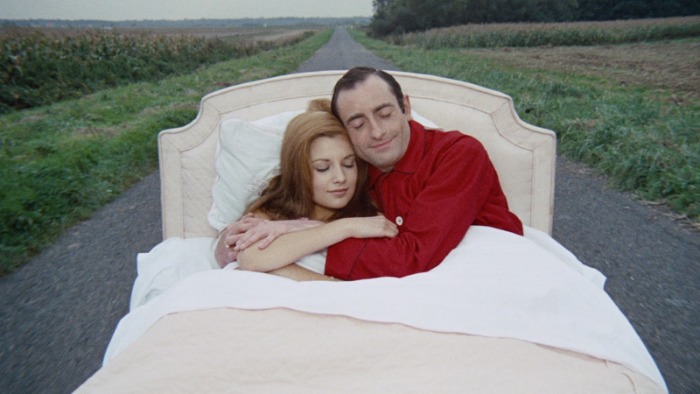 The kids loved this film after being initially resistant to it. Le Grand Amour opens with a long, languid aerial shot of Paris accompanied by a light score--an introduction that seems to portend a rather prosaic romantic comedy. Immediately, though, the film becomes a deceptively searing examination of male sexual immaturity. Broaching the subject of how men are pathetic and can turn dangerous when spurned and/or jealous is valuable when there's a fourteen-year-old young man sitting there coming fully into the madness of adolescence. Among the subjects we covered in this regard was the question of pornography and how men tend to objectify and idealize women in ways that are socially unhealthy for them--and potentially physically unhealthy for women.

The hero of Le Grand Amour, on his wedding day, thinks of all his other loves and imagines he could have married any of them. It gradually becomes clear that his ex-girlfriends don't pine for him in the same way. My wife shared how her ex-boyfriends would still contact her years after they'd broken up and had no contact, obviously carrying a torch that had long since gone out for her. Women, of course, have to walk a tightrope to somehow not antagonize men for fear they'll turn violent.

Étaix, in the gentlest way possible, shows how his hero takes his wife's affections for granted while daydreaming about his young secretary. In a wonderful scene, he laments that he's not ten years younger, and then the object of his affection appears in his fantasy as an eight-year-old child.

We're all big-time dog lovers and got a kick out of a gag where the family dog is startled in his sleep, repeatedly, by a nutcracker. It's one of those little jokes that pay off after maybe the fifth iteration.

In the end, when his wife returns from a trip, the hero has resolved to renew his relationship with her, only to find himself enraged by the attention she's getting from a young man at the train station.

Why is the hero upset by the attention his wife is getting?

I grew up only knowing of Étaix by reputation, since his films were mostly unavailable from the 1970s all the way through to 2009, when they were freed from a legal entanglement and given a series of revivals and restorations. Like Hitchcock's "five," which Hitchcock himself pulled from circulation in 1961, or the vast amounts of films "lost" to poor preservation practices, film history is littered with these gaps. Hitchcock's "five," by the way, are Vertigo, Rear Window, Rope, The Trouble with Harry, and his remake of The Man Who Knew Too Much--the distribution rights to which Hitch owned thanks to the slick negotiating of his agent, Lew Wasserman. Paramount, the studio that initially released all of those films excluding Rope, didn't really care because, pre-home video, what's the shelf-life of a film? Hitchcock was extremely reticent to reexhibit his films during his lifetime. He never provided a clear reason as to why. Three years after his death in 1980, Universal, then run by Wasserman, acquired all five "missing" Hitchcocks for $6,000,000 and began reissuing them theatrically and on cable and home video.

Anyway, I hardly knew anything about Étaix until 2009, when his work became widely available again. This brought us to a broader consideration of what films today are worthy of preservation and, indeed, who should be making that decision.

I wanted the kids to get it into their heads that there are no movies that deserve to be destroyed, an issue near to my heart. There are movies I despise, there are filmmakers who are monsters, but we are not on the side that burns books, as it were. We just aren't. In our house, anything is permissible, so long as it's curated and there's a conversation around it. Curated because we all deserve enough information to decide for ourselves whether or not we want to consume a piece of art; conversation because all experience is illicit without consensual examination and contextualization. If my kids wanted to watch Salò, for example, or Birth of a Nation, I'm cool with it, so long as they know exactly what they're getting into and that we're going to have a long discussion afterwards about their feelings, prejudices, reactions, and revulsions.

The aim of this series is akin to our parenting philosophy: fall off the jungle gym; I'll be there to brush you off or explain to you why you shouldn't have climbed it, given that this particular jungle gym was built over an alligator pit. All we can do for our kids is armour them in knowledge, curiosity, a critical mind, and the self-confidence to reject or accept ideas on their own terms upon careful consideration.

What is Le Grand Amour about?

The kids had a lot of answers for this one: the messiness of love being the main one, the puerility of male sexual fantasy another. I brought up the idea of how difficult marriage is.

My wife and I are strong together. We've been married 22 years and fell fast in love 22½ years ago when she was 27 and I was 24. But we went too fast, we took chances we wouldn't take again, and though it worked out for us, I think we must've fought for a solid year during those first three years of marriage. We've gone through miscarriages, financial worries (an issue once again with the plague putting both of us out of a job), the deaths of our fathers... A lot. 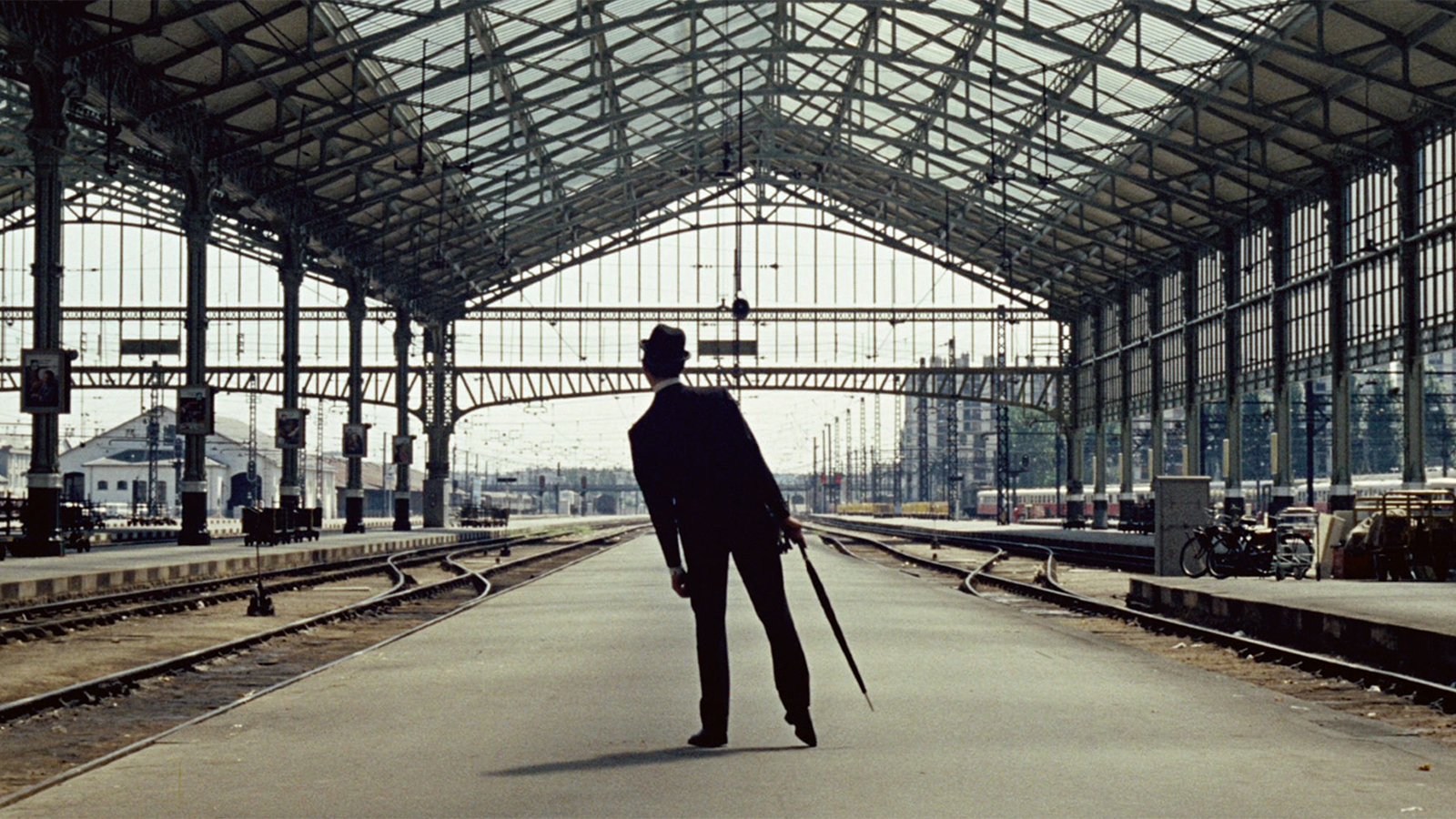 With Le Grand Amour, we were able to share with our kids how we learned to fight in a way that didn't result in permanent injuries to our relationship--and without leaving deep scars on them along the way; how we learned to trust each other and exorcise our sexual jealousy.

Mostly, I talked about how I had learned to manage my temper--to allow for the expression of emotion and vulnerability without rushing to judgment and to let go of much of the programming I received as the male child in a traditional Chinese family.

One of the best things I ever heard about marriage is that you promise to love not one person for the rest of your life, but instead the hundreds of people your partner becomes over the course of your lives together. Le Grand Amour is an appealing snapshot of a man at the beginning of that journey.